Here's what you need to know about her and her achievement:

The 20-year-old became the first unseeded woman to lift the Suzanne Lenglen Cup since 1933.

She emulated the darling of Roland Garros, Gustavo Kuerten, by making the French Open her first career title - the feat the Brazilian achieved in 1997 on the day Ostapenko was born.

The youngster launched an impressive tally of 299 winners from her fluorescent green racquet. 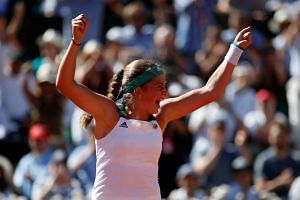 Born to former football player Jevgenijs Ostapenko and Jelena Jakovleva, she was introduced to tennis at age five and idolised Serena Williams while growing up.

Ostapenko was initially coached by her mother, with her father serving as a fitness trainer.

She speaks Russian, Latvian and English.

2014: She made her WTA tour main draw debut at the Tashkent Open.

2015: First top 100 season after reaching the second round at Wimbledon and US Open.

2016: Represented Latvia at the 2016 Rio Olympics where she lost to Australia's Sam Stosur in the opening round.

2017: Before entering Roland Garros, she came close to winning three titles this year, losing in the semi-finals at Auckland and Prague and the final at Charleston.