LONDON (REUTERS) - Rafael Nadal and the world's best men's tennis players found themselves having to endure a 4am meeting in the freezing cold after fire alarms forced them to evacuate their central London hotel on Tuesday (Nov 14).

American player Jack Sock described the pre-breakfast meeting of the top players - the season's best have gathered in London for the men's traditional end-of-season ATP finals - as "15 minutes of freezing, miserableness".

Sock explained how the players were all disturbed in the early hours when the alarms went off at their hotel on the banks of the River Thames. 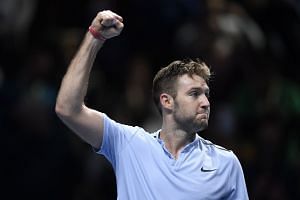 "It was probably one of the most annoying noises I've ever heard in my entire life," said Sock, who had been with his girlfriend on the second floor of the hotel.

"We were right there, kind of right in the centre of it. Super loud, super annoying. I stayed in the room for a while, which obviously probably isn't the smartest thing to do.

"I'm not even sure what the exact reason why the alarm went off but it was unbearable to stay in the room.

"Outside, we saw everyone, Rafa (Nadal, the world number one), Dominic (Thiem). Everyone was all bundled up, freezing cold, just wanting to get back inside.

"Everyone obviously put on clothes - it was pretty cold outside - some more than others! The whole thing was probably 15 minutes of freezing, miserableness."

The unscheduled early morning call evidently had no effect on Sock, who later in the afternoon beat Croatia's Marin Cilic in an epic three-set group match that lasted nearly two and a half hours.