MONACO (AFP) - With his French Open title defence starting in five short weeks, Novak Djokovic is desperately searching for the key to lifting his game on clay.

The former world number one, who was replaced at the top of the list last November by Andy Murray, joined his rival at the exit of the Monte Carlo Masters after losing a third-set break in a quarter-final defeat to Belgian David Goffin 6-2, 3-6, 7-5 on Friday (April 21).

The 29-year-old Serb seems to be short of ideas in defeat: "I don't know. I don't know. I'm doing everything that I can to play well.

"I think I'm playing better than I have in first couple months of the year. So that's a positive.

"But clay is a very particular surface that requires, of course, a lot of practice, a lot of movement. Hopefully, I'll get those in the weeks to come." 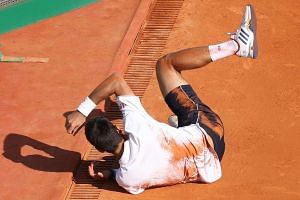 Djokovic, whose Australian Open title defence ended in a shock second round exit in January, said that he would not add to his schedule and will try to stick with the Madrid and Rome Masters events in May to complete his Grand Slam preparations for Paris.

"I wasn't planning to play a tournament. I think it's going to stay that way. But we'll see."

Murray, who was knocked out in the third round in Monte Carlo, has taken a wild card into next week's Barcelona Open where Rafael Nadal will be working for a tenth title at his home club in the Catalan capital.