BOGOTA (AFP) - Robert Farah, the world number one doubles player, will miss the Australian Open after testing positive for doping, the Colombian said on Tuesday (Jan 14).

The 32-year-old Canadian-born player said he had been told by the International Tennis Federation (ITF) that Boldenone - a steroid - was found in his system from a doping test on Oct 17, 2019 in Cali.

"I'm going through one of the saddest moments of my life and, without a doubt, the saddest of my sporting career," he wrote on his social media accounts.

The revelation came after another South American player, Chile's Nicolas Jarry, was provisionally suspended by the ITF after testing positive for banned substances at the Davis Cup in November.

Boldenone is widely used by farmers in Colombia to boost the growth of cows, but it is banned by the World Anti-Doping Agency.

"I'm sure that's what generated the result from the test in question," said Farah.

In 2018, the Colombian Olympic Committee warned its athletes about the presence of Boldenone in beef.

Farah said he was tested two weeks earlier in Shanghai but that sample was negative. 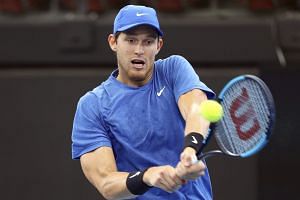 He said he had been tested more than 15 times throughout the year.

"With my team and a group of advisers we're looking into the steps to take in a process in which we hope to show that I've never used any products that violate fair play and ethics," said Farah, who had been training in Los Angeles ahead of the Australian Open.

They were runners-up at the Australian Open in 2018.