BEIJING (AFP) - China's rising star Wang Qiang is enjoying the hottest streak of her career but admits that she has surprised herself with her swashbuckling form.

The 26-year-old is even being touted as a potential successor to double Grand Slam champion and China tennis icon Li Na who retired in 2014.

Wang demolished an injury-hindered Jelena Ostapenko, the former French Open champion, 6-0, 6-0 to surge into round three of the China Open on Tuesday (Oct 2).

On the back of a momentous three months, Wang is now China's highest-ranking player at 28th in the world and chasing more WTA titles to go with the two she picked up in July and September.

"Now I'm doing well and this is kind of a surprise for all of us," she admitted after seeing off Ostapenko in double-quick time in front of a delighted Beijing crowd.

"I believe at this stage when I'm relaxed, I can do better.

"I do not want to focus on ranking or victories, I just want to be relaxed and enjoy the matches here."

Wang won her first WTA Tour 250 title at the Jiangxi Open at Nanchang in July, then her second last month at the Guangzhou Open.

She reached the semi-finals of the Wuhan Open last week before retiring hurt, but was rampant against the struggling 12th seed Ostapenko despite still nursing a leg injury. 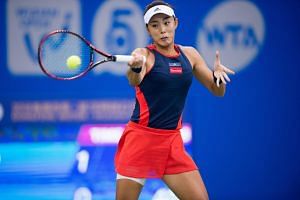 Wang's run of success also includes an Asian Games gold medal in Indonesia in August and she is fast making a name for herself in China and abroad.

Wang grabbed headlines at the French Open with her straight-sets demolition of Venus Williams, offering a hint of what was to come.

Aside from her undoubted talent, Chinese fans have warmed to Wang's personality, praising her as steely on the court but good-natured and humble off it.

She credits her Australian coach Peter McNamara, a former top-10 player who previously trained Grigor Dimitrov, with playing a significant part in her recent rapid progress.

"He has always told me he is proud of me," said Wang.

"I'm not so sure if he's saying it from the bottom of his heart, but after working together, I felt it was really helpful."

Li, who triumphed at Roland Garros in 2011 and won the Australian Open in 2014 before retiring later that year, is one of Wang's idols and spurred a generation of tennis fans in China.

Wang, who will turn 27 in January, has left it relatively late if she is to become a major force in tennis - Japan's Naomi Osaka is just 20 and is already US Open champion.

But Li was also a late developer and was 29 when she won the French Open, making history as the first Asian player to lift a Grand Slam.

Before the Asian Games, Wang - who is eager to dampen expectations and comparisons with Li - underwent an intense training programme.

"The more practice, the more you run, on the court you will actually feel you are confident in your level of play," she said.

Wang's next opponent will be the winner of Wednesday's match between seventh seed Karolina Pliskova and Aliaksandra Sasnovich.