(REUTERS) - Andy Murray announced on Monday (Aug 12) he would not play singles at the US Open after losing in his long-awaited return from hip surgery at the Cincinnati Masters.

The Scot lost 6-4 6-4 to Richard Gasquet in his first singles match since January before saying he had turned down a wild card into the men's draw at the year's final Grand Slam.

"I didn't feel I was able to make that decision before today's match."

He indicated, though, that he would play doubles and mixed doubles at Flushing Meadows in two weeks and left open the door for possibly for playing before then.

"I may play Winston-Salem potentially," he said of the North Carolina event, which starts in six days.

"But I'll probably look at just playing doubles and mixed doubles. That's what I will do at the US Open."

In his first match since the hip resurfacing surgery which he hopes will prolong his career, Murray started tentatively but improved as the went on, even if he was always up against it after Gasquet broke his serve to start both sets.

"I don't really know what I was expecting, to be honest. I think I did okay," he told a news conference.

"I think there was a lot of things I would like to have done better in the match, but, you know, you also have to be somewhat realistic, as well, in terms of what you can expect."

Not having playing singles tennis for several months had an obvious impact, he said. 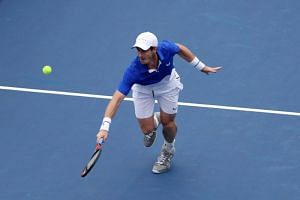 "I think physically, you know, my legs were a little bit heavy at the end of the match in comparison to maybe what they normally would be if you played a bunch," he said.

"I was having to move quite a lot laterally, and I didn't move forward particularly well. Like when he drop-shotted, there was a few times I didn't even run to the ball, didn't react to it, and that's nothing to do with my hip."

The former world No. 1 arrived on centre court to huge cheers, recording a video of the moment as he offered a big smile.

But the first serve was far from what Murray and the crowd - particularly the fan waving the Scotland flag - wanted.

A two-time winner of the tournament, Murray double-faulted and Frenchman Gasquet, who returned himself in May from groin problems, was quickly 2-0 up.

Murray then seemed to find himself. The Briton, moving better, won three consecutive games, including a break of serve, to go ahead 3-2.

But Gasquet, 33, won the next three games to move ahead 5-3 and into position to take the opener.

Murray played much better in the second set and had a break point to get back on serve at 2-2. But Gasquet never let go of his early break and eventually went up 4-2.