Svitolina, the world No. 5, went into the match as the firm favourite but was never in the hunt against the 27th-ranked Collins, going down meekly 6-1, 6-1 in just 56 minutes.

The American dominated every facet of the match against a disappointing Svitolina, who won this tournament in 2018.

The American served well and returned even better, winning 62 per cent of the points off Svitolina's first serve and 61 per cent off her second.

She joins two compatriots in the second round following wins by Sophia Kenin and Alison Riske.

The 35-year-old Australian has slipped to 98th in the world rankings and has never played well in front of her home fans in Brisbane.

But with new coach - and former doubles partner - Rennae Stubbs at her side, Stosur played a strong tactical game to overcome Kerber. 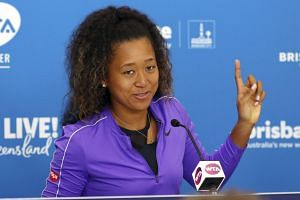 "She knows all the players, her tactical awareness and everything about the players is excellent," Stosur said.

"That was something last year when I was going through without a coach, I found hard to do that day after day.

"Even though we know a lot of players and you know what to do, having that other set of eyes doing that is obviously very helpful."