Season-ending event on women's tennis calendar will move to Shenzhen

Singapore will not be the host city of the Women's Tennis Association (WTA) Finals after this year as the season-ending tournament will move to Shenzhen, The Straits Times understands.

Ms Sarah Clements, vice-president, Tennis (Asia), at Lagardere Sports, the event promoter, confirmed the end of Singapore's run yesterday, saying: "It has been a wonderful journey, and we would like to wish the WTA as well as the next host city every success.

"We are focused on delivering a spectacular grand finale for our fans and partners this October."

Singapore has hosted the US$7 million (S$9.3 million) tournament, which features the world's top eight women's singles players and doubles teams, since 2014. This year's event is from Oct 21-28.

According to a statement from Lagardere, the Singapore Tourism Board (STB) and national sports agency Sport Singapore, the latter two parties "evaluated the opportunity of a potential extension and decided not to pursue this".

Sources revealed that the decision appears to stem from the inability of all parties involved to agree on the value and price of the Finals.

However, in 2016, WTA chief executive Steve Simon had said he was keen to find a fixed venue for the tournament, and commented then that Singapore would be a place the WTA "would be very proud to call home".

It is the next best thing to a Grand Slam - you are watching elite players who have performed consistently over the whole year, so the quality of play is not compromised.

GRADUATE STUDENT DONALD TAY, who has attended every edition of the WTA Finals Singapore.

In a statement yesterday, Mr Lionel Yeo, the STB's chief executive, said the WTA Finals "has contributed to Singapore's existing suite of vibrant lifestyle offerings and helped put us on the tennis world map with good branding benefits".

These included last year's sold-out concert by the Backstreet Boys as well as the inaugural tennis week, which saw community engagement efforts such as talks by British tennis coach Judy Murray.

The WTA revealed last October that it had received bids from Manchester, Prague, St Petersburg and Shenzhen for the Finals, although some tennis websites such as Tennis World had also named Singapore as one of three front runners.

It is understood that the WTA board held a vote and decided to award the Chinese city the rights to host the season finale from next year until 2028.

The inaugural BNP Paribas WTA Finals Singapore presented by SC Global drew more than 129,000 fans in 2014, 130,000 in 2015 and 133,000 last year. The Singapore numbers included fringe events as well. Industry experts believe the absence of "star presence" in the women's game has made it difficult to attract crowds on match days.

Deloitte Singapore and South-east Asia sports business group leader James Walton said: "If it is not Serena (Williams) or (her older sister) Venus, a lot of Singaporeans are not that interested - they were more interested in seeing Martina Hingis, who is a household name in tennis."

Mr R. Sasikumar, founder of sports marketing agency Red Card Global, added: "The icons of the game - like Serena Williams and Maria Sharapova - have not been coming here. People go to watch stars." 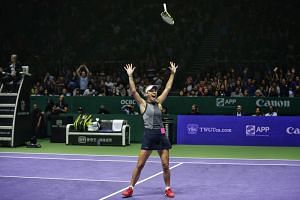 Mr Walton cited other reasons such as the "financial muscle" of countries like China, the WTA's desire to explore new markets and the increased availability of top sporting action here.

The Formula One Singapore Grand Prix has been extended for another four years until 2021, while the HSBC Singapore Rugby Sevens will be staged at the National Stadium from April 28-29.

It was also announced yesterday that Japanese company Sumitomo Mitsui Banking Corporation has renewed its golf sponsorship of the SMBC Singapore Open for another three years. The HSBC Women's World Championship, another marquee golf event, is into the last year of a three-year cycle, and renewal talks are ongoing.

Graduate student Donald Tay, who has attended every edition of the WTA Finals Singapore, was disappointed to hear the news.

The 29-year-old said: "It is the next best thing to a Grand Slam - you are watching elite players who have performed consistently over the whole year, so the quality of play is not compromised."