Spaniard Verdasco was cast as a villain last week after appearing to berate a ball boy for not bringing his towel quickly enough during a semi-final defeat by Yoshihito Nishioka at the Shenzhen Open.

A video of the world No. 30 impatiently gesticulating and appearing to rant at the youngster swiftly circulated on social media, leading to criticism from fans and pundits.

Federer stopped short of criticising Verdasco - acknowledging that nerves can become ragged in competition - but stressed the need to respect ball kids.

"You always want to respect the ball kids for who they are and the great job that they're doing," the Swiss said. "But it's not easy for each and every player to control their emotions exactly".

Federer, himself a ball boy in his youth, said it was vital the young helpers enjoyed a good experience.

He added: "You don't want to have them leave feeling like, 'Oh my god, I was not appreciated or I was not liked or it was actually a horrible thing', you know?"

While many have condemned Verdasco's behaviour, some have also pointed out that he is by no means the first tennis player to treat a ball kid harshly.

Last week at the China Open, Aryna Sabalenka was caught on camera shaking an empty bottle in the general direction of a ball boy, before tossing it on the floor.

In 2015, Novak Djokovic, now a 14-time Grand Slam winner, apologised to a Wimbledon ball girl after screaming in her direction, leaving her looking shaken.

Meanwhile, Wimbledon is prepared to take action against players who behave badly towards ball kids and will discuss the matter with representatives of men's and women's tennis, its commercial director Mick Desmond said yesterday.

"We'll talk to the ATP (Association of Tennis Professionals) and the WTA (Women's Tennis Association) about behaviour," he said.

"There is a code of ethics at Wimbledon. A ball boy or ball girl getting shouted at for not throwing a towel back (is not part of it)... the players clearly know what's expected of them and what's not and Wimbledon is not afraid to fine players, whatever their standing."

Not so long ago, the likes of multiple Grand Slam winners Bjorn Borg, John McEnroe and Jimmy Connors fetched their own drinks and took care of themselves at changeovers.

These days, players plant themselves in a courtside chair and gesture for drinks, ice packs, bananas, towels, new rackets and anything else they may need.

The tide, though, may be turning. 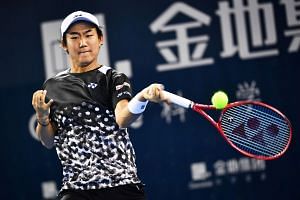 At next month's Next Gen ATP Finals in Milan - the season-ending tournament for the best Under-21 male players - players will be instructed to use a towel rack at the end of the court "to remove the onus on ball kids to handle towels".

Judy Murray, the mother of three-time Grand Slam winner Andy, later tweeted her approval: "What about a rule that makes players get their own towels?"

World No. 1 Rafael Nadal has, however, spoken out against the new implementation, saying that he is not a fan because it will slow matches down.