Astra Sharma came to the Australian Open as an unknown and left with a Grand Slam runner-up trophy, headlines across Australia, India and Singapore and over A$150,000 (S$145,700). Her two-week journey has been a message: It's perfectly safe to dream.

Yesterday, Sharma - a citizen of Australia but born in Singapore - had the moment of her young life when she and her partner, John-Patrick Smith, entered Rod Laver Arena after the women's singles final to contest their mixed doubles final.

They lost 7-6 (7-3), 6-1 eventually to the third seeds Barbora Krejcikova and Rajeev Ram, but the smile on Sharma's 23-year-old face rightfully would not leave.

First Grand Slam events are supposed to be quiet educations: You come, walk softly, enjoy the free food, sit on a table next to Rafa, get a beating on court and leave chastised but inspired.

"It's been a great two weeks," she said later. "I came here wanting to play a lot of matches." And she's leaving having attracted some attention with her electric play.

I think I was pretty good at being competitive. I wasn't scared. It's tough going out on a Grand Slam stage and playing like you do in practice.

ASTRA SHARMA, on her performance.

Nick Kyrgios mentioned her in a tweet and Roger Rasheed, former coach of Lleyton Hewitt and Gael Monfils, tweeted that "she is the best female natural athlete I've ever seen come out of Australia".

Every small thing counts in sport, every tiny lesson, every little nugget stored away and for Sharma this fortnight has been the equivalent of a minor degree.

She has, she explained, felt the intensity of top-class tennis and strolled into some of its greatest courts. As she put it: "I got a huge amount of experience being exposed to that level of play." 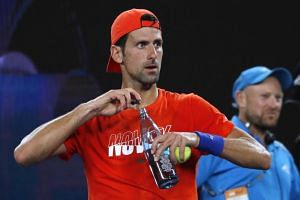 The money she earned - more than she's ever made - is vital for tennis tugs sharply at the pockets. Her winnings will help buy plane tickets and pay for hotels for this game is an expensive travelling show. As her mother, Susan, agreed: "(The money) gives her a bit of a breather."

Many things were earned in the Melbourne heat and Sharma takes away a stronger sense of herself as an athlete. When asked what she did well at this Open, she replied: "I think I was pretty good at being competitive. I wasn't scared. It's tough going out on a Grand Slam stage and playing like you do in practice."

Susan says the experience has given her child "more confidence in herself and her ability" and its value can't be overstated. In the hard road that is tennis, players need validation of their hard work and that is what Sharma has got. She knows inside her that she belongs.

A version of this article appeared in the print edition of The Sunday Times on January 27, 2019, with the headline 'Sharma proud of being competitive'. Subscribe
Topics:
More
Whatsapp Linkedin FB Messenger Telegram Reddit WeChat Pinterest Print Purchase Article Copy permalink