Japanese, a Rising Stars winner in 2015, is 3rd player to earn slot for WTA Finals in S'pore

Naomi Osaka will be dressed for success after she became the third player to qualify for the Oct 21-28 WTA Finals Singapore women's tennis season-ender.

The 20-year-old will get her wish to wear adidas' creation for the Singapore Indoor Stadium event.

"I went to the adidas distribution and they have this special dress for the people who go to Singapore, so I really wanted to go to Singapore," she said on the WTA Insider Podcast after becoming the first Japanese to win a Grand Slam singles title at the US Open last month.

"So I'm going to make that my No. 1 goal right now, and I think it's been working out."

World No. 1 Simona Halep and No. 3 Angelique Kerber have already booked their tickets for the BNP Paribas WTA Finals Singapore presented by SC Global, the last time it will be held in the Republic before moving to Shenzhen.

But the Romanian is a doubt after revealing yesterday an MRI scan showed a slipped disc in her back. The French Open holder retired from the China Open after losing her first set in Beijing on Sunday. 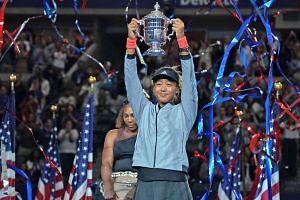 Naomi Osaka is a picture of poise amid the drama

No pressure in Japan for US Open champ Osaka

"Qualifying for the WTA Finals is a huge accomplishment," said Osaka. "Winning the Rising Stars helped give me the confidence to play on the big stages so I am excited to go back to Singapore and compete with the top players of the season."

In 2015, an 18-year-old Osaka, then world No. 202, upset the 35th-ranked Caroline Garcia to win the WTA Rising Stars Invitational that was part of the WTA Finals. This time, she is back as one of the best players on the planet.

Singaporean Clare Cheng is "super excited" at the prospect of watching the world No. 6.

"I watched her final against Garcia... it was really cool to watch her play but I didn't think she'd be here again," said the 15-year-old, who will be playing in the Future Stars competition at the WTA Finals.

"I've been following her the past few years and I just can't wait to see her play again because her game has matured a lot, and she's a great role model for Asians."

Osaka will be the third Japanese to play in the WTA Finals, the last being Ai Sugiyama in 2003. Kimiko Date qualified thrice, reaching the semi-finals on her debut in 1994.

The WTA Finals is a 10-day tennis festival featuring the world's best players vying for US$7 million (S$9.6 million) in prize money and two of the most prestigious titles in women's tennis.