World No. 1 shrugs off 'rocky' form as she bids for third straight Grand Slam at French Open

PARIS • Serena Williams heads into Sunday's French Open as an outsider for a Grand Slam title for possibly the first time in 20 years, with questions surrounding her fitness after a poor start to the season.

However, the American is not the only one struggling for form and fitness, with concerns over world No. 1 Naomi Osaka.

With two successive Grand Slam crowns, the Japanese is a proven heavyweight on hard courts.

Her record on clay, though, is less impressive, having never won a WTA title on the surface and failing to progress past the third round previously at Roland Garros.

She also had to pull out in Rome and Stuttgart following respective hand and abdominal injuries.

But Osaka saves her best performances for the biggest stage - she has won 76 per cent of all of her Grand Slam matches.

And, despite failing to win a tournament after splitting with coach Sascha Bajin in the wake of her Australian Open title, this has still been her best clay-court campaign. 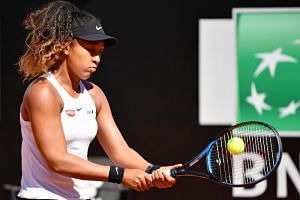 Having reached the last eight in Madrid and the semi-finals in Stuttgart, she now feels her big-hitting game is ready for the red dirt as "rocky" as things have been since Melbourne.

Ahead of the Paris event, Osaka, who is hoping to become just the 11th woman to claim a third consecutive major, said: "I'm kind of comfortable with it now. It's just like I randomly slip. I feel like if I can get that under control, I'll be good.

"I can't necessarily say it's been ups and downs because if I think about it, it's definitely been going up.

"Every match that I've played (on clay), I've learnt a lot. I've tried to take what I've learnt into the next match. I've done that well."

Williams, whom Osaka beat in the final at Flushing Meadows, is also aiming to make history at the French Open, even though it has been a stop-start year for her so far.

While the former world No. 1 has the opportunity to equal Australia's Margaret Court's record of 24 Grand Slam triumphs, her last major victory came at the 2017 Australian Open shortly before taking a break from the sport owing to her pregnancy.

However, the 37-year-old remains confident her work off the court can help her find her best game in the biggest tournaments.

She said last week in Rome: "I actually haven't been able to train or practise a lot. I was out much longer than I expected.

"But I did everything I could to stay fit. I knew that I love the clay season and I wanted to be a part of it. It's not about today or tomorrow.

"For me, it's about playing well at all the big moments... Obviously the Slams, just getting ready for those events."

A version of this article appeared in the print edition of The Straits Times on May 24, 2019, with the headline 'It's more ups than downs for Osaka'. Subscribe
Topics:
More
Whatsapp Linkedin FB Messenger Telegram Reddit WeChat Pinterest Print Purchase Article Copy permalink