MELBOURNE • For all the talk of the next generation at this year's Australian Open, it is the old guard who remain dominant.

The men's singles final today will be contested by two battle-hardened veterans, Novak Djokovic playing Rafael Nadal, world No. 1 against world No. 2, in the 53rd edition of their rivalry.

Seven years after their most famous encounter in Melbourne, they meet again at the Rod Laver Arena.

On the evidence of their performances throughout the past fortnight, it will not be a surprise if the quality of play comes close to that of the gruelling 2012 final - a 5hr 53min epic that ended with both so close to collapsing that they were provided chairs to sit on during the presentation ceremony.

Djokovic was the champion that day, and he is the slight favourite to triumph again with a 27-25 edge in their head-to-head record.

But Nadal has a 4-3 advantage in Grand Slam finals and has won the last three. In all Grand Slam meetings, he has a clear advantage over Djokovic, with a 9-5 record.

There is much at stake in the final. Fourteen-time Grand Slam champion Djokovic, 31, can move ahead of Roy Emerson and Roger Federer with a record seventh Australian Open crown.

Nadal, 32, has the opportunity to move to within two major titles of Federer's 20, and would then have the French Open - where he has won 11 times - to come in May. It has all the makings of a classic.

"He has played impressively throughout the tournament," Djokovic said of the Spaniard.

"He hasn't dropped a set. He looked as good as ever on the hard court. This final comes at the right time for both of us. I'm sure we're going to have a blast.

"Knowing both of us, we're going to give everything. I've played so many epic matches against him. Of course, the one that stands out was the final in 2012. Hopefully, we don't go that long this time."

What a turnaround the past year has been for Djokovic, as he prepares to play for his third consecutive Grand Slam title.

After losing in the fourth round of last year's Australian Open, he had surgery on his right elbow. Disillusioned on the rocky road of recovery, it was not until the grass-court season in June that he rediscovered his mojo and went on to win Wimbledon in July and the US Open in September. 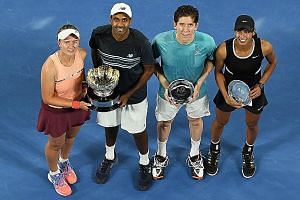 Sharma proud of being competitive

Djokovic pinpoints his semi-final victory at Wimbledon against Nadal as the turning point. He prevailed in five sets in a match that lasted almost 5 1/2 hours.

"Winning 10-8 against Nadal in the fifth set, that has catapulted me to a different, more confident self. It has allowed me to then excel in the months to come after that," he said.

"Nadal has historically been the greatest rival that I played against on all the surfaces. Some matches that we had against each other were a great turning point in my career. They have made me rethink my game.

"Those kind of encounters have also made me the player I am today. These are the kind of matches that you live for, the finals of Grand Slams, playing the greatest rivals at their best. What more can you ask for? This is where you want to be."

Nadal arrived in Melbourne with low expectations, having taken a hiatus from the tour after last year's US Open, where he withdrew in the semi-finals with a knee injury.

Here, he is looking to keep his legs spry, his troublesome knees healthy. He is hitting more balls on the short hop, sticking closer to the baseline, volleying more.

He has also streamlined his service motion, cutting fat from his wind-up in a search for more accuracy and greater pop.

Nadal said his preparations for today would focus on his own game. "I just have to think my way. I have to keep doing the things that I am doing," he said.

"That's my feeling, just keep playing the way that I am playing and, let's see, expect to have one of those special days."