BELGRADE • Mountain climbing with his wife Jelena after a poor first half of the year helped Novak Djokovic rediscover his mojo to win this year's Wimbledon and US Open Grand Slam titles, said Serbia's world No. 3 on Monday.

The former world No. 1, winner of 14 Slams, suffered a dramatic two-year dip in form after winning the 2016 French Open but is brimming with confidence ahead of next week's Shanghai Masters.

"If I have to pick one moment which turned my season around, it was the aftermath of my quarter-final exit at this year's Roland Garros," he told reporters after an open practice session at his tennis complex in downtown Belgrade.

"I took four or five days off and went mountaineering with my wife. Spending time out in nature helped me clear my mind and put things into perspective.

"I then won titles at Wimbledon, Cincinnati and the US Open. I am very grateful to hit top form again after a difficult first half of the season following the elbow surgery."

The 31-year-old admitted his comeback was unexpectedly quick. "I had to change my game, especially my serve, as a result of the surgery. I didn't expect to come back so quickly," he said.

"I was in the unfamiliar situation of losing more matches than I was winning and when that happens, you begin to wonder whether you've made the right decisions. 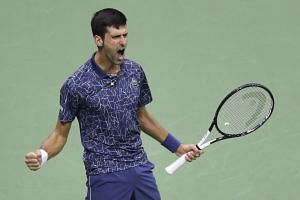 "Now that my confidence is back, I am hungrier than ever to win more Grand Slams. I am a different player and a different person than I was three years ago. I still believe I can repeat that 2015-2016 streak when I won four Slams in a row."

Masters events in Shanghai, Paris and London present an opportunity to dislodge Rafael Nadal from the summit of the world rankings. With no need to defend points until the end of the year and his rival out with injury, Djokovic could finish the year top for the fifth time after stints in 2011, 2012, 2014 and 2015.

He said: "I hope Belgrade will bring me luck. I decided with my team to stay a bit longer in Belgrade to recover and make a solid base for Shanghai."

But he also recognised the need to be patient, saying: "We are leaving this possibility (of being world No. 1) open. First and foremost I have to play well in Shanghai."

He is ranked third behind Nadal and Roger Federer, but second in the race for the ATP season-ender in London behind the Spaniard.

A version of this article appeared in the print edition of The Straits Times on October 03, 2018, with the headline 'Djokovic limbers up for rankings climb'. Subscribe
Topics:
More
Whatsapp Linkedin FB Messenger Telegram Reddit WeChat Pinterest Print Copy permalink