Coach insists Feng and Co. will learn after being severely tested by Ukraine on day one

Inside the 13,000-seat Malawati stadium hang the flags of all 99 participating countries. Yet curiously, hosts Malaysia got only that of their neighbours wrong as the Singapore flag was hung upside down.

The error proved somewhat prescient, for Singapore's women endured a topsy-turvy time yesterday, on day one of the World Team Table Tennis Championships.

The tournament's fifth seeds had started their campaign well, convincingly beating France 3-1. However, they had to go the full distance against 14th seeds Ukraine, before Yu Mengyu, 26, won the deciding fifth singles.

Sometimes it's good to win in these circumstances, because only in trying situations can you find your best self. They will take confidence from this and improve in the next game.

She said: "It's one of the most nerve-wracking matches of my career. I just tried to slow things down, because previously I was rushing everything, from picking up the ball to my play." 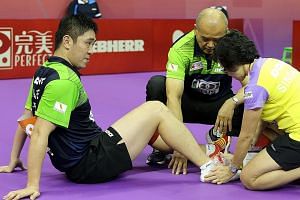 Coach Chen Zhibin said the manner of victory in the near-empty arena would galvanise his charges for the rest of the tournament.

He said: "Sometimes it's good to win in these circumstances, because only in trying situations can you find your best self. They will take confidence from this and improve in the next game."

Earlier in the day, wins from Feng and Yu had given the Republic a comfortable win over France.

Feng, who lost to lower-ranked opponents in her last two International Table Tennis Federation World Tour events, made sure there was no repeat as she beat world No. 149 Pauline Chasselin 11-3, 11-8, 11-8.

Feng, who has dropped to her lowest ranking in nearly four years, said she is slowly finding her feet.

She was particularly pleased with her win over Bilenko, a defensive player who had beaten her at the Swedish Open in November.

"Today was difficult. We had to come from behind many times but our refusal to give up will boost our confidence for the matches ahead," said Feng.

"I lost to Bilenko, a chopper, last time. But I told myself not to give up even after falling behind, and winning motivates me for the rest of the tournament."

Feng and Co. are aiming for a spot in the semi-final to preserve their medal streak, which started in 2008.