Before Pang Xue Jie arrived in Kuala Lumpur for the World Team Table Tennis Championships, he could have been forgiven for expecting to play only a bit-part role.

After all, sport had taken a back seat after he was called up for national service in 2014. While others trained twice daily, he managed only single sessions.

But yesterday, with Singapore's best player Gao Ning out with a sprained ankle, Pang was asked to step into the breach - against third seeds Japan, no less. 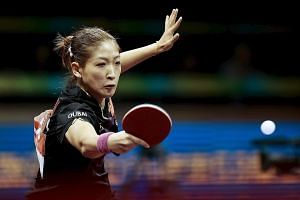 Liu has eye on 'most important title' to fulfil Olympic dream

Niwa tried but simply could not handle the Singaporean's serve and rapid returns.

The magnitude of Pang's achievement still had not set in as he arrived at the mixed zone in the Malawati stadium looking slightly startled.

"Initially my aim was to not look too bad. (On Sunday) Gao Ning was giving me some advice on how to play him (Niwa) and cope with his serve, and I just stuck to our strategy," said Pang, whose last international outing was the Commonwealth Championships in December. "It's the biggest win of my career."

That set the tone for 22nd seeds Singapore. The Republic had no one ranked in the top 100, while Japan's players were in the top 30.

But Yang Zi and Clarence Chew both took their opponents to the full five games before losing.

While the win was a shot in the arm, Pang, who will complete his NS in June, said he has yet to think about life post-NS.

"Being able to beat such a strong opponent despite the lack of training gives me confidence but I still haven't decided if I want to train full-time," he said.

The men played Portugal in the evening, but there was no upset as the fifth seeds ran out 3-0 winners against Pang, Chew and debutant Ethan Poh.

The Singaporeans play Belarus today and Ukraine on Wednesday, although the odds will be stacked against them.

After a thrilling finale to Day One, the second day of competition proceeded with nary a hitch for the women's team as they easily defeated Belarus 3-1.

Yu Mengyu, building on from her decisive fifth singles win over Ukraine on Sunday, also defeated Pavlovich in the second singles 12-10, 11-5, 11-5.

The performances left Singapore coach Chen Zhibin in a good mood. He said: "Today was good, I could sit better during the matches.

"Mengyu did very well. She is coming into her own, getting a hold of the tempo and rhythm. Tianwei is also hitting top form after yesterday's win. Even Herng Hwee could have won today. She just lacks the experience on this stage.

"Looking at the team's progress, I'm confident going into the next two group matches."

The women play Poland today, before ending the group stage with a clash against third seeds the Netherlands - Chen's former charges - tomorrow.

Correction note: An earlier version of the story stated that Koki Niwa is ranked 220 places higher than Pang Xue Jie. This is incorrect and the figure should be 320 instead.