Singapore table tennis player Feng Tianwei is not a woman easily fazed, even if her dyed hair, cheeky smile and shy demeanour exudes an at times adolescent disposition.

Underneath that sunny exterior is a fearless competitor and a serial winner. Three Olympic medals, a world team gold and an Asian Cup singles title - among other accolades - speak for themselves.

Yet, even she cannot help but feel apprehensive ahead of the World Team Championships, which start today in Kuala Lumpur, with the women playing France and Ukraine and the men taking on Poland. 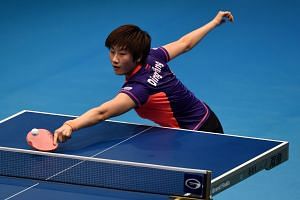 Speaking after a training session at competition venue Malawati Stadium, she said: "This time we do have more difficulties (in the lead-up) compared with past years. With a new coach, I'm more nervous because I'm not sure how the adjustments we've made will play out.

"This tournament is also an important one before the Olympics so definitely there's more pressure. Right now I feel okay but we'll only know when the competition starts."

ONE STEP AT A TIME

With a new coach, I'm more nervous because I'm not sure how the adjustments we've made will play out.

For the past three editions of the biennial tournament, Feng has been Singapore's best player which means she is usually relied upon to play two matches, particularly against top opponents.

It is a role she has performed with distinction, particularly in 2010 when she won both her ties against China in the final and helped Singapore lift the Marcel Corbillon Cup for the first time.

But her trepidation this time is not unfounded. The team, who includes Yu Mengyu, Isabelle Li, Yee Herng Hwee and Zhang Wanling, have seen two coaching changes in the last four months, including the removal of former head coach Jing Junhong after a fallout with the players including Feng.

At the helm now is former Netherlands coach Chen Zhibin, once ranked fifth in the world for China.

Knee and wrist injuries recently have not helped Feng, who has also suffered early exits in her last two ITTF World Tour events. She is now ranked eighth in the world, her lowest ranking since June 2012 when she was 10th.

That being said, world rankings could also be a red herring when it comes to Feng. A month after she dropped to world No. 10, she clinched a bronze at the 2012 London Olympics, Singapore's first individual medal in 52 years.

China's world No. 2 Ding Ning offered a vote of confidence for her Singaporean rival. She told The Sunday Times yesterday: "Many athletes go through ups and downs, but the best of them always peak at big competitions."

Chen was also optimistic. He said: "Tianwei has been winning consistently since 2008. Her poor form is down to external factors, like confidence, and coping with the bigger ball (introduced in July 2014)."

Since taking charge two weeks ago, he has increased the intensity of training sessions.

He said: "You need to simulate a competition environment during training. That means putting everything behind each shot. Otherwise you'll never be able to summon that strength during a real match, when you are tired and nervous. It's something I've been drilling into them."

Singapore are aided by a favourable draw which sees them avoid the top two seeds China and Japan.

They are in Group C with Poland, Ukraine, France and Belarus and third seeds the Netherlands, who the Republic have beaten in three previous meetings at the team championships.

Chen's insight into his former employers will be also invaluable.

The fifth seeds will be expected to top the group and reach the quarter-finals, leaving them one win away from the semis and a guaranteed medal - something the women have managed since 2008.

Feng said: "We'll be using every match to apply the tweaks we've made. The key is to use each game to regain my form, and hit top gear in the later stages."