According to screenshots on website The Middle Ground on Friday (Oct 28), STTA deputy president David Sim called out the world No. 6 for her "ill-discipline, disrespect n misconduct (sic)" and said the 30-year-old was "a disgrace to the nation".

He was responding to comments on his Facebook page from other users.

The Middle Ground also reported that Sim had implied that the STTA had leaked news of Feng's misdemeanours to the press. This misconduct was cited in a report that alleged, among other things, that Feng had submitted "false claims amounting to a few hundred dollars". 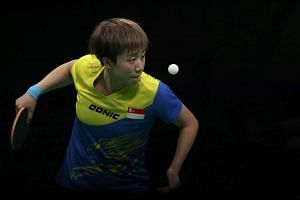 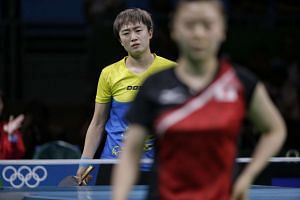 Responding to queries from The Straits Times, the STTA said: "The recent Facebook comments made by Mr David Sim, Deputy President of STTA, are his personal views and he is not speaking on behalf of STTA.

"Regarding the recent media reports, Feng Tianwei was cautioned about the proper claiming procedure but she did not falsify nor claim more than what she was permitted.

"Once again, we wish Feng Tianwei all the very best for the future."

The Straits Times was unable to reach Mr Sim for comments.

The latest saga comes three days after the STTA dropped Feng from the national team, in a move that shocked the local and international fraternity.

In a press statement, the association said Feng "does not fit into the STTA's current plans for rejuvenation" as she will be 34 at the Tokyo 2020 Olympics.

China-born Feng is Singapore's most bemedalled Olympian. She won one silver and two bronze medals in three Olympic appearances.

She also anchored the Singapore team to a stunning win over China in the final of the 2010 World Team Table Tennis Championships.

But Feng and the team fared poorly at the Rio de Janeiro Olympics. She lost in the quarter-finals of the singles event to Japan's Ai Fukuhara, while the women's team lost in the bronze-medal match to Japan.