SINGAPORE - Singaporeans who missed out on Joseph Schooling's victory parade in August have another chance to catch the country's first Olympic champion in the flesh from Saturday (Nov 19).

The University of Texas student, 21, will be back in the Republic for a week from Friday (Nov 18), chiefly for a Singapore Swimming Association golf fund-raiser next Tuesday (Nov 22).

But he also has a slew of public appearances, starting with an event at Ngee Ann City on Saturday, where he will be meeting five Make-A-Wish Foundation children beneficiaries as part of a Watsons Singapore initiative. 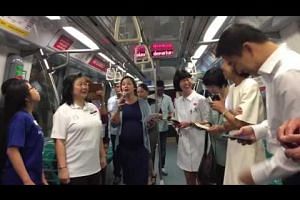 The swimmer will also hold book signing sessions, including one at Singapore Press Holdings News Centre on Monday (Nov 21) where he will sign two books about him published by Straits Times Press. The books, titled From Kid To King and Schooling Joseph, are works of current and former Straits Times (ST) sports journalists.

ST readers who have questions for the butterfly specialist can write them in the comments thread on ST's Facebook page where this story appears.