Tonight, the paradox of an unstoppable force meeting an immovable object will be played out at the Philippine Sports Stadium. But in a clash of philosophies between attacking verve and defensive rigor, the outcome could well be inertia.

In the blue corner, Thailand are refined and riveting to watch as they hunt for goals. And in the red corner, Singapore will be ruthless and remorseless in their approach to nullify all opponents.

The stalls have been set, their intentions clear. Both are four-time tournament winners, both are led by their former star strikers. 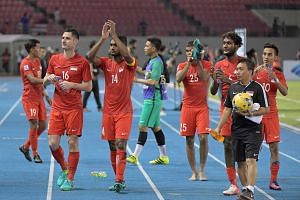 Football: What needs to happen if Singapore are to make AFF Suzuki Cup semi-finals

V. Sundramoorthy and Kiatisuk Senamuang were both flashy players but as coaches, they are like chalk and cheese.

"We will play entertaining football," the Thai declared yesterday. "I know Sundram well since my playing days. This will be a hard game. Singapore have one point and they will fight. But we want the three points."

Typical of his hush-hush media strategy at this AFF Cup, Sundram revealed little of his plans, preferring to use humour to deflect questions. He joked: "Zico (Kiatisuk's nickname) still looks great. If he is Singaporean, I would put him in the team."

It was said in jest, but so dire is the Lions' lack of fire-power that the 51-year-old tactician considers a frontal assault suicidal.

Although Kiatisuk praised striker Khairul Amri, the only man to score in three AFF Cup finals (2004, 2007 and 2012) including twice against Thailand - as "a superstar of Asean football", Sundram is toying with the idea of using dynamic midfielder Yasir Hanapi up front instead of the veteran.

Hariss Harun and M. Anumanthan will double-lock the midfield with Safuwan Baharudin and a forward given licence to attack.

"We will come up with something and we will try to come up with the points," was all Sundram would say of his plan. "Thailand have many good players, I can't really single one out. They work for one another and use one another's strengths.

"We respect our opponent but we don't fear them. We will go out to battle."

It is unlikely he will veer away from his preferred 3-5-2 system that dominates midfield. Left midfielder Theerathon Bunmathan may not be fully fit but the coach has a ready replacement in Kroekit Thaweekarn, who is a scoring threat with seven goals in 29 international appearances.

The coach could also encourage attacking midfielder Chanathip Songkrasin, whose dribbling skills and 1.58m stature has drawn comparisons with Lionel Messi, to run at the Lions and drag defenders out of their positions.

But the Thais also have a Plan B. After conceding two goals to crosses in the win over Indonesia, the defending champions have trained with a 4-3-3 set-up, using orthodox full-backs to cover the flanks in case Sundram decides to attack from wide areas.

Still, it could all be moot. For this looks set to be a match where the spear and the shield cancel each other out.