SINGAPORE - This year's The Straits Times Run in the City took off early Sunday (July 16) morning, with runners taking on the longest distance (18.45km) the first to be flagged off from about 5am from the start point on Esplanade Drive.

There were about 5,000 participating in this category, created two years ago as a nod to the year the national daily was founded.

All runners went past Marina Bay Sands, Esplanade Bridge and the Singapore Flyer, ending at the Padang where a post-race carnival awaited them.

Many came more than an hour before the scheduled start time to warm up, and most came donning the iconic blue running vest that has become synonymous with the annual run.

Into its fifth edition, the ST Run this year partnered the Standard Chartered Singapore Marathon as its race partner, serving as a lead-up event to the December marquee event. 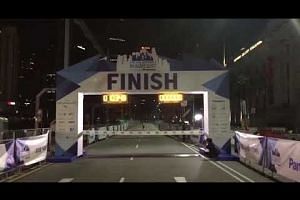 ST Run in the City 2017: Runners revel in party atmosphere at post-race carnival

An eight-month training programme was launched  to help runners prepare for both events. It is helmed by national marathoner and 2013 SEA Games gold medallist Mok Ying Ren and featured every Saturday in ST.

Some runners came inspired by the 2013 SEA Games champion.

Said bank executive Lim Hwe Min, 43, who ran with her husband: "We have been anticipating this run for some time already. This year is especially good because my idol Mok Ying Ren is running.

"He's such a disciplined runner, down to earth, gone for running workshop before. Inspired by his love for running and passion for running. And friends who joined last year told me about the carnival and I'm looking forward to it."

Singapore's oldest marathon runner, Chan Meng Hui, also took part in the 18.45km run. The 87-year-old has been in every edition of the ST Run since it started.

"No matter how slow, must finish the run," he said.