Singapore looks poised to record its best showing at a single Paralympics after securing a second medal at the ongoing Rio de Janeiro Games on Sunday (yesterday morning, Singapore time).

With six more days of competition before Sunday's closing ceremony, the Republic's para-athletes have a few more opportunities to eclipse their record four-medal harvest from the 2008 Beijing Games.

Her good friend Theresa Goh followed it up with a bronze in the 100m breaststroke SB4 final on Sunday evening.

Yip is a good bet to make another breakthrough on Thursday as she bids to become the first Singapore athlete to win two golds in a single Paralympic Games. She is racing in the 50m backstroke S2 and is the world record holder in the event. 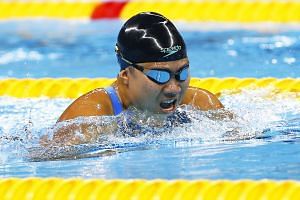 Despite her suffering, Vervoort's not done with life yet

Outside the pool, boccia players Nurulasyiqah Taha and Toh Sze Ning had a creditable run to the mixed-pairs bronze medal playoffs, but lost 1-8 to the Greece team yesterday.

We have two medallists now. I think that will really inspire a lot of our para-athletes from Singapore to aim for the highest. ''

However, with para-equestrian rider Laurentia Tan's history of four medals in two Games, she is expected to get at least a podium finish from her three events in Rio. The medal rounds for equestrian events begin today.

At Beijing 2008, Singapore earned a gold and a silver from Yip, and two bronzes from Tan. In 2012, Tan was the only medallist, winning a silver and a bronze.

Chef de mission Ho Cheng Kwee said: "We have two medallists now. I think that will really inspire a lot of our para-athletes from Singapore to aim for the highest."

Mr Lee wrote: "Well done and thank you for being an inspiration, leading by example and showing us how hard work and perseverance pay off!"

A version of this article appeared in the print edition of The Straits Times on September 13, 2016, with the headline 'S'pore on track for best showing at Paralympics'. Subscribe
Topics:
More
Whatsapp Linkedin FB Messenger Telegram Reddit WeChat Pinterest Print Purchase Article Copy permalink