Team Singapore's 25 Olympians remain free of symptoms of the Zika virus, more than a week after the conclusion of the Games in Rio de Janeiro.

But with an outbreak here following local transmission of the virus, the contingent is continuing with precautionary measures.

Athletes and officials, who returned to Singapore in batches, with the last batch arriving home on Wednesday last week, are being monitored.

They have also been advised to report their well-being to the team doctor, Dr Darren Leong, every day. 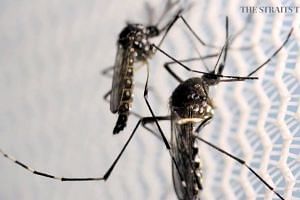 Said Mr Low Teo Ping, chef de mission of Singapore's Olympic contingent: "We are keeping a close tab on the athletes and officials, monitoring them for symptoms such as fever, skin rash, headache, fatigue, muscle pain and joint pain for three weeks upon their return.

"We have also advised them to continue to apply insect repellent, wear long-sleeved clothing where possible and to avoid travelling to multiple places in a day."

National badminton player Derek Wong, 27, who is married to former national shuttler Vanessa Neo, has been back for nearly a fortnight. He said: "I am monitoring my health and signs of any symptoms. I'm also in touch with our team doctor who went to the Olympics with us."

Singapore is fielding 13 athletes for the Sept 7 to 18 Paralympics, which will also be held in Rio.

Like their Olympic counterparts, Singapore's Paralympians, who left for Rio last night, have been issued items that will help safeguard the contingent against insects.

These include arm and calf sleeves, military-tested mosquito repellent, and permethrin solution with which to treat their clothing.