The Singapore National Olympic Council (SNOC) Athletes' Commission will likely step in to try and resolve matters between marathoner Soh Rui Yong and the SNOC.

Yip Renkai, chairman of the SNOC Athletes' Commission, told The Straits Times (ST) yesterday: "For issues like this, we should step in to find a balance to achieve a win-win solution.

"It's for the good of the sport and this is something we want to help resolve as soon as possible."

Soh, who retained his marathon title at last month's Kuala Lumpur SEA Games, lodged a protest last Saturday against the compulsory donation of part of his prize money to Singapore Athletics (SA).

As an individual SEA Games gold medallist, the 26-year-old will receive $10,000 under the Multi-Million Dollar Award Programme (MAP), which provides a cash payout to athletes who win medals at major Games.

The incentive scheme, devised by the SNOC in the 1990s, requires that athletes donate 20 per cent of their prize money to their national sports association for training and development.

The Tote Board/Singapore Pools is the primary sponsor of the MAP and the donation is deducted before the prize money is distributed.

Soh feels that Singapore Athletics is undeserving of the contribution and claims the association had not provided him with any coaching help for the SEA Games. He added that SA has been plagued by infighting and controversies over the past year.

Ng, 68, told The New Paper on Thursday that he did not want to get into a debate about Soh. He said: "Everybody is entitled to his view. But the award is a privilege, not entitlement. If an athlete does not believe in it (or its rules), he can opt out of it." 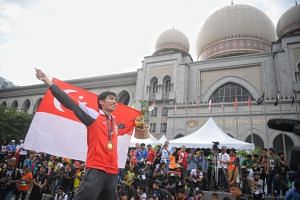 Athletics: Soh Rui Yong says he had no coaching help from Singapore Athletics ahead of SEA Games

On Thursday, Ng, who is also an International Olympic Committee member, wrote on his Facebook page: "When I read about (an) athlete going to the media fighting for self-interests without regard (for) the overall good of his sport, when one forgets that it is a honour and privilege and not a birth right to fly the flag of Singapore, I am reminded of Ashley (Liew)."

Soh told ST yesterday: "I'm happy to meet Mr Ng to better explain the things he might not have a complete understanding of - the challenges athletes are currently facing with SA, what can be done to improve the system, and why I was happy to donate my 20 per cent in 2015 but not this year."

He added: "There are specific channels that are available to the athletes, and if needed, we will step in and keep this debate out of the public eye."