SINGAPORE - Footballer Justin Hui has many achievements to be proud of - some of these include passing the trial to earn a place in the Singapore Sports School in 2010, scoring the only goal of the match in his first start for Hougang United in the S-League last year, and captaining Meridian Junior College to their fourth straight Schools National A Division boys' football title last May.

For scoring the hat-trick that gave his side the 3-1 victory over Victoria Junior College, the 20-year-old earned another memorable accolade on Tuesday (March 13) - the inaugural Straits Times Young Athlete of the Year award.

The award is an extension of ST's Star of the Month and Athlete of the Year accolades, which are backed by F&N's 100Plus.

Justin was one of four nominees for the ST Young Athlete of the Year award, which honours student-athletes for their achievements at the annual National School Games. The other three nominees were squash player Kan Weng Yean, judoka Wang Jinghan and gymnast Lincoln Forest Liqht Man.

Ms Jennifer See, general manager of F&N Foods, said of the Straits Times Young Star of the Month and the ST Young Athlete of the Year awards: "Our goal is to play our part in bringing out the best in every young athlete by empowering and inspiring them to outdo themselves in their chosen sport and we are delighted that we now have a platform to recognise and celebrate their successes."

Justin acknowledged the "honour" of winning the award, but stressed that the award bears greater significance for young student-athletes like himself.

"I'm really happy that the young athletes are getting more recognition," he said. "This award is important so that the younger generation of athletes has something to work towards.

"For me, it just serves as motivation to work harder."

Throughout his 12 years of playing football, the Liverpool fan has been driven by his love for the sport.

Such was his dedication to the Beautiful Game that he chose to miss his promotional examinations during his first year at MJC in 2015, as it clashed with the 2016 Asian Football Confederation Under-19 Championship qualifiers in Thailand, which he was involved in. He was retained for a year.

He admitted that few would have done what he had, but said: "I felt it was an opportunity that might not come again anytime soon, so I chose football, but it really depends on the individual and the situation. 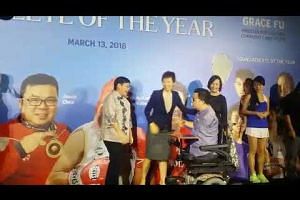 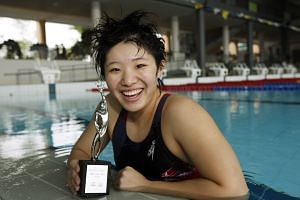 Singapore sports: Looking back at past winners of The Straits Times Athlete of the Year award

"I didn't have the fear that it would be the wrong choice, because I'm really into football and the games I played ended well."

His immediate priority is getting ready for Hougang's first S-League match this season on April 4 against the Young Lions but he has loftier ambitions for the future.

"The goal is to eventually play overseas. Recently many players have been going overseas to Thailand and Malaysia, hopefully I can do the same and maybe take a step further (than South-east Asia), if possible," he said.

Hougang United coach Philippe Aw has only known Justin for slightly over a year, but the 40-year-old is already impressed by the midfielder's resilience and dedication to football.

"As a young boy stepping into a professional set-up, you are sometimes given the rough treatment. We come in hard on you and we tackle you just to see how tough you are... he had no fear and just did what he needed to," added Aw.

"He's always giving 100 per cent in training, he takes instructions very well and he's got a good set of brains on him. We need more thinking footballers in Singapore."