With a 100-and 200-yard butterfly double at the Big 12 Swimming and Diving Championships, Joseph Schooling looks to have rediscovered some of the fire that made him Singapore's first and only Olympic gold medallist.

The 22-year-old delivered a strong statement of intent for the March 21-24 National Collegiate Athletic Association (NCAA) Division I Swimming and Diving Championships when he won the 200-yard fly on Saturday (yesterday morning, Singapore time) in 1min 42.23sec at the Lee and Joe Jamail Texas Swimming Center.

He had led the field by more than a second at the halfway mark before easing off and touching the wall ahead of West Virginia University's David Dixon (1:42.50) and fellow University of Texas swimmer Sam Pomajevich (1:44.38).

With his victory (45.10sec) in the 100-yard fly final on Friday, the University of Texas senior finished his final Big 12 meet with five golds, after helping the Texas Longhorns to gold medals in the 200-and 400-yard medley and 200-yard freestyle relays.

With his exploits, he helped the Texas men's team bagged their 22nd Big 12 title while the women's team claimed their 16th.

However, Schooling was pipped by team-mate and record-breaking 100-yard freestyle champion Tate Jackson for the Men's Swimmer of the Meet award. 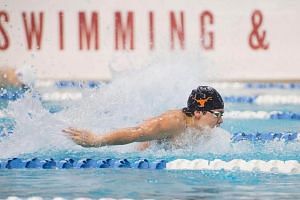 The Rio Olympics 100m fly champion will be desperate to return to winning ways after losing the 100-and 200-yard fly events at last year's championships.

Schooling finished last in the 200-yard fly heat in 1:45.47 and did not progress to the final.

In an interview with The Straits Times earlier this month, Schooling said when asked if he was confident of wresting his NCAA individual titles back next month: "With the work I did, I set myself up better than I ever did, but nothing is a given."

A version of this article appeared in the print edition of The Straits Times on February 26, 2018, with the headline 'Schooling warms up for NCAAs in style'. Subscribe
Topics:
More
Whatsapp Linkedin FB Messenger Telegram Reddit WeChat Pinterest Print Purchase Article Copy permalink