WELLINGTON (AFP) - Jonah Lomu, the hulking New Zealand winger who died on Wednesday from kidney disease, dragged rugby union into the modern era with the same ferocity he used to trample opposing players.

Hailed as the sport's first global superstar, he shot to international fame at the 1995 World Cup in South Africa, a year after becoming the youngest ever All Black at the age of 19 years and 45 days.

Lomu collapsed and died at his Auckland home early Wednesday morning after returning from Dubai on Tuesday, where he had been holidaying after being at the Rugby World Cup in Britain. Paramedics were called but he was unable to be resuscitated.

At his peak, the 1.96 metre (six foot five inch) Lomu weighed 120 kilograms (265 pounds) and could cover 100 metres in 10.8 seconds, providing a combination of speed and power that terrorised opponents.

While New Zealand ultimately lost to hosts South Africa in the 1995 final, the tournament's defining image was of Lomu trampling over a hapless Mike Catt on his way to four tries in the All Blacks' semi-final win over England.

"He's a freak, and the sooner he goes away the better," dejected England captain Will Carling said after the match.

But shortly after his breakthrough 1995 tournament, he was diagnosed with the rare kidney disorder nephrotic syndrome, which eventually cut short his career. 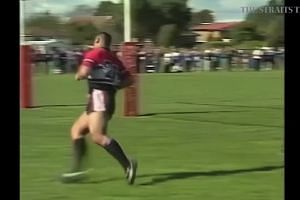 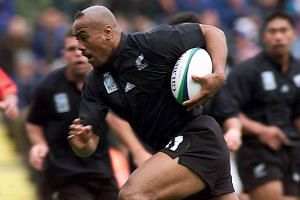 The winger estimated that, even at his best, the condition left him playing at 80 percent capacity, feeling constantly drained and taking days to recover from training sessions.

After a health-related dip in form following the 1995 World Cup, he returned to his best at the 1999 edition, scoring eight tries to take his tally at the rugby showcase to 15.

The record was only matched this year by South Africa's Bryan Habana.

After 1999, Lomu never again hit the highs that turned him into one of the game's biggest drawcards and his international career petered out in 2002, when he was just 27.

Lomu was inducted into the World Rugby Hall of Fame in 2011, when the sport's governing body said he had left an indelible mark on the World Cup.

That same year, Britain's Sunday Times hailed him as the most influential player in rugby history, crediting him with boosting the game's popularity as it made a difficult transition to professionalism after more than a century as an amateur code.

"It is said that one man never changes history, not even a man as remarkable as Lomu. But because of his magnificence and because of the time and the place, he drove rugby into a new era," the newspaper said.

As his kidney condition continued to worsen, Lomu was warned in 2003 that complications including nerve damage could confine him to a wheelchair unless he had a transplant.

He later described the time as his darkest moment.

"I was this guy who'd been racing around down there on that field in 1999, running straight over people, scoring tries, winning games, having fun. And I ended up so sick that I couldn't even run past a little baby," he said in 2005.

In 2004, he received a kidney donated by friend and New Zealand radio broadcaster Grant Kereama and, while his health improved, attempted comebacks were repeatedly marred by injury.

Lomu was born to Tongan parents in the gritty Auckland suburb of Magree and said in the 2013 documentary "Anger Within" that he endured a tough childhood with an abusive father.

When he was 12, machete-wielding gang members hacked to death his uncle in a turf war, prompting his mother to enrol him for a rugby scholarship at a top school to give him an escape route.

He never looked back and was soon playing on representative teams.

Lomu divided his time between New Zealand and France in his latter years with his third wife Nadene, with whom he had two sons, Brayley and Dhyreille.

He returned to New Zealand in 2011 for the All Blacks' successful World Cup campaign, starring at the tournament's opening ceremony, but spent 16 days in hospital after a health scare linked to his kidney condition.

Doctors told him in February 2012 that his donated kidney had failed and he needed a new transplant.

Lomu said then that "everyone has to die sometime" and he had no regrets.

"I'm really lucky, I've already lived more in one lifetime than many would in six or seven lifetimes," he said.

"For me, the important thing is to ask 'can you look in the mirror and say you've done everything to enjoy life?'."