TOKYO (REUTERS) - Winning the Pacific Nations Cup has given Japan every confidence that they are on the right track to achieve their goal of reaching the quarter-finals of the World Cup for the first time.

After big wins over Fiji and Tonga, Japan overpowered a dogged United States 34-20 in Suva on Saturday (Aug 10) to win the title for the third time and earn a timely confidence boost six weeks out from hosting the World Cup.

Following a shortened Top League domestic rugby competition, coach Jamie Joseph has had all his players in camp for six months with the aim of peaking for the World Cup.

"I think it all came down to preparation," Brave Blossoms captain Michael Leitch told reporters. "We've been together since February and all the hard work has paid off.

"I think we're on the right track (for the World Cup)." With most national teams only coming together following strenuous domestic competitions, Japan believe they will be the best prepared side for the World Cup after their long period together in camp.

The victory in Suva also moved Japan up to ninth in the world - their joint highest-ever ranking - and has given them a strong foundation to cause another upset at a World Cup.

Despite their famous win over South Africa in Brighton four years ago, Japan ultimately failed to reach the quarter-finals, a feat they have never managed to achieve in eight World Cups.

"Our first goal was to win the PNC," said Joseph, who took over from Eddie Jones in 2016. 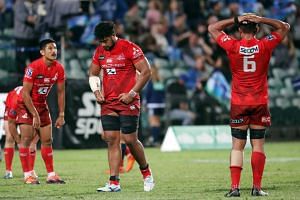 "The next goal is to go to the World Cup and play our Japanese brand of rugby and make the top eight." Joseph was also delighted with the manner of his team's victories, with 14 tries and 109 points chalked up over the three matches.

Although there were a few disciplinary issues, Japan produced a free-flowing, exciting brand of rugby that is sure to whet the appetite of Japanese fans for the World Cup.

Japan have one more test before the World Cup and it is an imposing one - a clash with southern hemisphere champions South Africa in Saitama on Sept 6.

Drawn in Pool A along with Ireland, Samoa, Scotland and Russia, Japan's fate may come down to their final group showdown against the Scots in Yokohama on Oct 13.

It was the Scots who brought the Brave Blossoms down to earth with a 45-10 thumping four days after their upset of South Africa in 2015 but Japan will be confident plenty has changed since then.