The much-anticipated return of the Singapore Sevens also brought a timely reminder about the unpredictable nature of the sport.

In only the third match - a total of 24 pool games were played yesterday - France paid little heed to the reputation and pedigree of New Zealand to post a shock 24-0 win.

Not only was the shutout just the 10th time the All Blacks have failed to score in 16 seasons of the World Rugby Sevens Series - of which they have won 12 championships - it was the first French victory over the Kiwis since 2005. 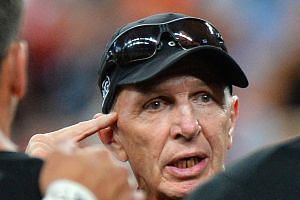 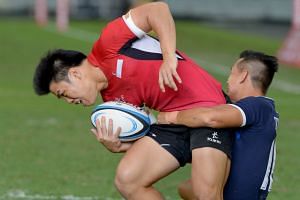 That triumph in Paris was also the only time France has won a Seven Series leg but for French captain Julien Candelon, who led his side to victories over the United States (19-17) and Canada (26-19) to top Pool B, their hard work was only half done.

The 35-year-old, whose side face Kenya in this afternoon's Cup quarter-finals, said: "We waited a long time to live a day like today... It was a difficult first game against New Zealand but we played a perfect game against them."

With three straightforward wins, South Africa eased out of Pool C and will face the All Blacks, for which two-time World Cup winner Sonny Bill Williams continued to struggle and looked off the pace required in sevens.

Their relatively inexperienced line-up will have given coach Gordon Tietjens plenty to mull over.

Argentina were also surprise pool winners as they qualified first in Pool D, courtesy of a 21-21 draw against Japan that put them on eight points, one ahead of Australia.

The group huddle that the 12 South Americans shared inside the players' tunnel after their match spoke volumes of a united front.

Mueller, 22, said: "We're all really good friends and this means a lot to us. We need to show the same fight and desire tomorrow against (quarter-final opponents) Samoa."

Their on-field hunger was matched by the thirsty crowd, judging by the beer-stained concrete floors as the National Stadium - which peaked at 23,508 spectators with many in fancy-dress costumes- soaked up the party atmosphere of a Sevens Series tournament.

For Fiji coach Ben Ryan, the performance of his team was sobering to say the least, after a sub-par 14-28 opening loss to Samoa.

The Fijians, winners in Hong Kong last Sunday and currently leading this campaign's standings, needed a 26-12 victory over England in the final match of the day to sneak into the Cup last eight.

Ryan said: "We started poorly and there was no excuse. The boys just didn't execute and our ball handling was poor. We need to sharpen these things up.

"There are a lot of good teams here and anyone can beat anyone on their day."