Much has changed since the last Singapore Sevens took place in 2006.

Perry Baker, now a key player for the United States rugby sevens team, was just starting college and eyeing a career in the National Football League (NFL) until a knee injury ended that dream.

The US Eagles were also in their formative stage. They did not qualify for the Singapore stop and finished 15th in the 2005-06 season. 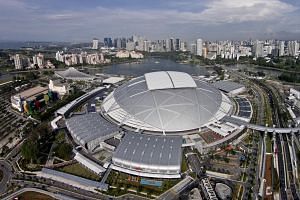 A decade on, they are soaring - with Mike Friday's side having established themselves on the back of some breakout performances in the HSBC World Rugby Sevens Series.

Their victory in London in May - last season's final leg - was their first Cup title and saw them ranked sixth overall. It was the first time in 15 attempts that the US had finished a season higher than 10th.

This campaign, Baker and his team-mates have notched wins over 12-time champions New Zealand (thrice) as well as Seven Series holders Fiji, and sit fifth in the table.

The American team, who turned professional in January 2012, fear no one, said Baker, whose thrilling wing play has produced 36 tries this term, second only to South African Seabelo Senatla.

The 29-year-old added: "There's so much confidence in the team. We know we can contend, and beat, the top teams. We've come a long way."

Times are certainly changing. The dominance of the All Blacks has waned; they were winners of eight of the first nine Sevens Series but only four of the past seven with South Africa, Samoa and Fiji entering the frame.

The Fijians are leading this series on 128 points, five ahead of second-placed New Zealand.

Kiwis coach Gordon Tietjens said: "The Fijian team probably has more depth than any other country in the world. In terms of Sevens players, they have loads of expertise, are a very tough team to beat and hence they are leading the Series."

With sevens set to debut at the Olympic Games in August, its profile has also soared and local fans are the beneficiaries this weekend.

Among the big names are All Blacks World Cup-winning duo Sonny Bill Williams and Liam Messam and American NFL star Nate Ebner, all of whom might not have featured in the Singapore Sevens in a non-Olympic year.

Baker said: "We have a (New England) Patriots player on our team. That's huge. Two or three years ago, that would have been impossible but now everyone wants to get into the team for Rio and try to win an Olympic medal."

Priorities may have shifted but some things remain the same. The 2006 Cup final at the old National Stadium featured a triumphant Fijian side and current coach Ben Ryan expects nothing less from the latest generation who are chasing a second straight title.

He said: "Our greatest opponents are not New Zealand or South Africa, it's ourselves. As long as we are prepared for the first game on Saturday against Samoa, then we won't have any problems."