LONDON (AFP) - England prop Kyle Sinckler has no recollection of the Rugby World Cup final despite watching much of his side's defeat by South Africa from the sidelines after being knocked unconscious in the opening moments.

Sinckler was able to walk to the replacements bench where he witnessed England fall to a deflating 32-12 defeat, but admitted the affects of the concussion means he cannot remember the match and he has not watched it back since.

"It took three or four weeks to get over the final. It was dark," Sinckler told the Press Association.

"I was struggling because I tore my calf just before the semi-final, it was a pretty bad one as well so I couldn't really walk.

"That was getting better and then in the final I got a pretty big concussion, so I didn't really know what was going on.

The incident ended an outstanding World Cup for Sinckler, who scored his debut Test try in the quarter-final rout of Australia, and was one of the stars of a stunning victory over New Zealand in the last four.

"From what I heard South Africa played unbelievably well and were deserving winners on the day," added Sinckler.

"When you look back at the World Cup you have a sense of pride to have gone so close, but our aim was to win and become world champions and we fell short of that. 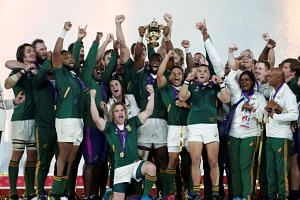 "It's bittersweet, but that's sport and we've got to keep going. We'll dust ourselves off and go again."

It remains to be seen if Eddie Jones will still be in charge of England come the next World Cup with his current contract up in 2021.

But Sinckler is desperate for the Australian to remain for as long as possible after he gave him his chance at international level.

"Eddie made me. He changed my life. To not see him as England coach whether I'm there or not would be pretty weird."