The women's 4x200m freestyle relay team were arguably Singapore's top performers at the Fina World Championships when they finished 13th in Gwangju, South Korea in a national record of 8min 8.44sec last Thursday.

The quartet of Quah Ting Wen, Gan Ching Hwee, Christie Chue and Quah Jing Wen were agonisingly close to securing the Republic's first Olympic relay spot since 1996, as they were 0.06 of a second behind 12th-placed South Korea, with the top 12 teams in each relay at the world meet earning their tickets to Tokyo next year.

There are four Olympic berths left, which will go to the four fastest teams in Fina-approved qualifying events until May 31 next year.

The Nov 30-Dec 11 SEA Games in the Philippines is one such meet, and national swimming head coach and performance director Stephan Widmer is confident of his swimmers' chances at the biennial Games, but he acknowledged that it may prove tougher than it was at the world meet, which ended yesterday.

Widmer told The Straits Times in a phone interview from Gwangju: "There's only four spots left and not every nation brought their athletes to the worlds, so scoring those four spots doesn't mean you can be slower than top 12 - sometimes you actually have to be faster to get those four spots than you have to be to finish in the top 12 at worlds.

"We have to aim beyond that. I'm looking at the 4x200m freestyle relay girls and there's so much potential they can develop in these (next) four months, and we know they normally can perform at that level and they thrive in it."

In addition to the women's 4x200m free relay, national marks were set in the men's and women's 4x100m free, and mixed 4x100m freestyle relay, although none of the swimmers progressed past the heats, notably Joseph Schooling in the 100m butterfly and Quah Zheng Wen in the 200m fly. 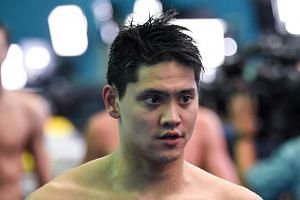 In the aftermath of Schooling's failure to make the 100m fly semi-finals, both coach and swimmer revealed the difficulties the latter had in the last four months adjusting to living and training in Singapore, having spent a decade studying and training in the US.

Asked on Schooling yesterday, Widmer said: "With the best teams in the world, (like) the All Blacks in rugby, normally their coaching team has been working together for a long time and so has their support staff.

"The athletes coming through have been mentored by the senior coaches so they speak the same language and understand one another and do it again and again and make it better.

"We certainly have to look at that as well as a nation, so I prefer people to be in our environment where we can then train the consistency but they have to find that solution for themselves."

He is happy, though, with young guns such as 19-year-old Darren Chua and Jonathan Tan and Cherlyn Yeoh, both 17, who made their debuts at the world meet.

Widmer noted: "There are some kids starting to show some glimpses (of their potential to perform on the world stage), they're definitely not there yet but they acted in this environment the same way as they did at the Asian Games and to me, that's encouraging.

"Look at where they were two years ago - even (Ting Wen) improved again and moved forward ... so give them another two years and give the coaches another two years to work with them, and get them towards world level and the stage we can and want to work towards."