The parents of medal-winning Paralympic swimmers Yip Pin Xiu and Theresa Goh revelled in their daughters’ feats in Rio. But at the heart of their success were common links to pain. Joan Chew tells their stories.

Theresa Goh: Family’s heartbreak soothed by her discovery of freedom and speed in water

It was what the doctors could not say about the infant, rather than what they could say, that caused her anxious parents far more anguish than anything else in the emerging crisis.

The baby girl, born two months premature, had been diagnosed with spina bifida, a neural tube defect in which the backbone protecting the spinal cord does not close as it should, causing a range of physical limitations.

Those were the harrowing moments that confronted Bernard Goh and his wife, Rose Mok, after the arrival of their first-born, Theresa, back in 1987.

There were the questions that had no immediate definitive answers for the couple: How severe was the physical disability? Would there be any allied intellectual hurdles? Could the nerve tissue be repaired? Would she need surgery? And what were the baby's long-term prospects?

Recalled Bernard: "We were shocked and didn't know where to turn to in order to learn about spina bifida, since there was no Internet then."

With sport, (special-needs children) get more opportunities to meet up with friends and keep themselves busy. It really helps them socially, emotionally and mentally.

BERNARD GOH , who introduced his daughter to the fundamentals of the breaststroke when she was five.

We tried not to differentiate between the three of them (in our parenting style). We helped her, but did not give in to her just because of her disability.

ROSE MOK, Theresa's mother, on how she and her husband dealt with the challenge of raising two-able bodied children alongside their eldest sibling, who suffers with spina bifida.

His wife teared up when this topic was raised, and turned away to compose herself.

The first-time parents' heartbreak was compounded because, they said, doctors were not keen to take up Theresa's case, and she was transferred from one hospital to another.

The family finally found a neurosurgeon who operated on the baby when she was four months old, closing the opening in her back, which had not fused as normal. However, defining the full extent of her medical condition was slow and - literally and metaphorically - extremely painful.

When she was about four, she was asleep in her cot in the living room when both parents heard a loud snapping sound. They realised that she had broken her thigh bone after her leg became caught between the railings of her cot.

By the time Theresa was seven, she had already endured 10 orthopaedic operations, some to correct the alignment of both club feet as well as to alleviate webbed fingers.

Defining the course of their daughter's life was, in no small measure, her indomitable will. Despite being paralysed from the waist down and suffering from urinary and bowel dysfunction, she placed no limitations on her physical boundaries and - crucially - her parents supported her all the way.

When she was nine and wearing leg braces, Theresa asked her parents for permission to climb up a playground structure about three metres high. They did not have the heart to say no, but watched her like a hawk as she made her way up on her own, fuelled by raw courage.

"It is this freedom we gave her," said Bernard, "that boosted her confidence over the years."

The family grew, with the arrival of a sister and brother for Theresa. And despite frequent hospital trips for their eldest child, the parents made sure she was not spared punishment when she misbehaved.

"We tried not to differentiate between the three of them (in our parenting style). We helped her, but did not give in to her just because of her disability," Rose said firmly.

Like most children, Theresa loved being put in the water, observed her mother. There was also the realisation that she needed to work on her upper body strength to compensate for her lower limbs.

When she was five, her father taught her a simple approach to the breaststroke which, not surprisingly, is her pet event. She began competing at 12 after being spotted by a sports volunteer at a public pool.

Theresa learnt the rules of competition the hard way when she was disqualified at a local swim meet after failing to touch the wall with both hands at both ends of the pool, recalled Bernard.

He and his wife firmly advocate the value of sport, especially for children with special needs. Bernard said: "Every child, able-bodied or disabled, has his or her unique strengths.

"With sports, (special-needs children) get more opportunities to meet up with friends and keep themselves busy. It really helps them socially, emotionally and mentally."

While Theresa dabbled in other sports like wheelchair racing, archery and powerlifting over the years, no environment felt more like home to her than the swimming pool.

She set her first world record at 15 and another at 19. The three-time Singapore Disability Sports Council's Sportswoman of the Year is also the country's most decorated Asean Para Games athlete with 27 golds.

Theresa also became the first swimmer from Singapore to compete at the Paralympics, in Athens in 2004.

In 2007, deciding she could not juggle her polytechnic course and swim training, she dropped out to focus on training full-time for the Beijing Paralympics.

It was a fraught decision, said her mother, revealing that it was " very difficult" for them, as parents, to agree to. They eventually relented, and let her quit school to concentrate on Beijing, where she came agonisingly close to a podium finish in the 100m breaststroke SB4 event, only to miss the bronze by 0.74sec. 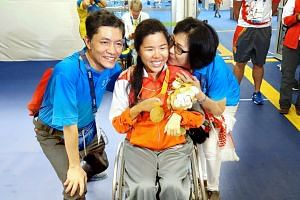 Her anguish was clear to her parents, who were in Beijing, witnessed the race and then took her out of the Athletes' Village for dinner that evening, where they could sense her devastation.

Bernard said: "We avoided the topic altogether and she put up a brave front for us. We knew she felt she had let everybody down, but we were not disappointed with her."

After that, Theresa laid off swimming for a year before returning to the pool. It was a wise decision, vindicated by her bronze medal in the same event in Rio last weekend.

No words were needed when Rose embraced her daughter after the victory ceremony at the Olympic Aquatics Stadium in Brazil, said the proud mother. "We just hugged, we didn't have to say anything."

No surprise, then, that the 29-year-old woman whose physical limitations are imposed by a faulty spinal column has proved that she has a backbone beyond compare.

A version of this article appeared in the print edition of The Sunday Times on September 18, 2016, with the headline 'Theresa Goh: Family’s heartbreak soothed by her discovery of freedom and speed in water'. Subscribe
Topics:
More
Whatsapp Linkedin FB Messenger Telegram Reddit WeChat Pinterest Print Purchase Article Copy permalink