The Qatari, who is also chairman of beIN Media Group, has been under investigation since March over the bidding process for the 2017 and the 2019 championships, with London hosting the former.

Al-Khelaifi was informed by letter of his "mis en examen", a French legal term that has no direct equivalent in the American or British legal systems but roughly translates as being charged.

Though that does not automatically trigger a trial, it means prosecutors believe there is strong or corroborated evidence of wrongdoing.

French prosecutors are looking specifically at two payments of US$3.5 million (S$4.8 million) in 2011 by Oryx Qatar Sports Investment, a company jointly owned by Al-Khelaifi and his brother Khalid, to a sports marketing firm run by Papa Massata Diack.

Diack's father Lamine was the International Association of Athletics Federations (IAAF) president from 1999 to 2015 and prosecutors are also seeking for the Senegalese pair to be tried for corruption and money laundering.

They have been accused of allegedly delaying doping sanctions against Russia, while the elder Diack was also probed for using his influence to gain votes for Doha among IAAF members and to obtain a date change to avoid the heat of the Qatari summer in return for payments. 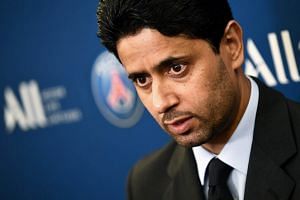 As well as probing the world championships, the French investigation is also examining circumstances in which the Summer Olympic Games were awarded to Rio de Janeiro for 2016 and Tokyo for 2020.

However, Al-Khelaifi's lawyer, Francis Szpiner, has denied all wrongdoing on the part of his client.

He said the Oryx payments were fully transparent and the facts of the case "do not concern him" and that his client "authorised no payment of any kind in relation to the allegations made".

Szpiner said: "Nasser Al-Khelaifi was neither a shareholder, nor a director of Oryx on 2011. He did not intervene either directly or indirectly in the candidature of Doha."

Preliminary charges have also been filed against beIN's chief executive officer, Yousef Al-Obaidly, in connection with suspected bribery in Qatar's bids to host the world championships.