SINGAPORE - National swimmer Gan Ching Hwee has been "doing a lot of math" lately. She's been trying to figure out how much quicker she has to go in order to qualify for next year's Tokyo Olympics in the 1,500m freestyle event.

"My personal best is 16min 33.54sec (the national record clocked at the Singapore National Age Group Championships last Saturday), and the Olympic (qualifying) timing is 16:32.04, so I was really close," said the Methodist Girls' School student.

"The last qualifying competition to qualify would be next year... so I think a 1.5-second improvement in that time is quite achievable - it's actually just 0.1sec per lap improvement."

In the space of seven months, Ching Hwee has slashed over six seconds off her previous national record of 16:39.70 set at last year's Asian Games in Indonesia, where she made her debut.

The 15-year-old, who also competed at the Youth Olympic Games (YOG) last October, was one of the Republic's many debutants at five major overseas Games last year.

She was among 209 Team Singapore athletes and officials hosted by President Halimah Yacob at the Istana on Tuesday evening (March 26) in recognition of their efforts and achievements. 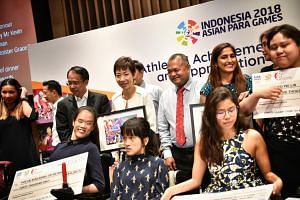 "At each of these Games, you attained many personal bests and collectively achieved several milestones for Singapore... thank you for flying the Singapore flag high," said President Halimah in her speech.

"What is even more heartening is that almost two-thirds of the 386 Team Singapore contingent members fielded last year were debutants in the respective Games.

"In particular, debutants made up three-quarters of the Team Singapore contingent at the Asian Games, and also contributed close to 70 per cent of the medals won.

"Our young athletes have demonstrated good potential at last year's Games, and I am confident this is an indication we can expect greater achievements from them in the future."

"One thing that stands out for me is that our athletes are getting younger and younger, there are more debutants, and I think they are acquitting themselves well," said Chan.

"We always say 'winning a medal is a bonus' but, for them, they expect to go and be competitive.

"And, as long as they do their country proud and keep the flag flying, we can be happy because they're on the right path."

"But it's not just about the medal, but it's also about what (the athletes) are doing and how they are progressing that will bring us to greater heights."

Para-swimmer Toh Wei Soong, who won gold medals (50m and 100m free S7) and one bronze (100m backstroke S7) at the Asian Para Games, as well as a bronze medal (50m free S7) at the Commonwealth Games, also has a larger picture in mind.

"Winning medals and having success at big Games is always done in the context of the bigger goal which is the Paralympics," said the 20-year-old, who made his debut in both major Games last year.

"So I tend not to focus too much or linger too much on my successes because there's always somebody else coming round the corner.

"But I'm happy that para sports are being recognised more by the Singapore public - I think it's just as great a realm as able-bodied sports, with tremendous messages of hope and perseverance."