The IPC had reviewed 23 bids for inclusion, with CP (Cerebral Palsy) football hoping to be restored to the programme after being dropped following its appearance at the 2016 Rio de Janeiro Games.

The seven-a-side sport has featured at every Paralympics since 1984.

IPC president Andrew Parsons said the board had needed to maintain athlete numbers at around 4,350 and ensure any changes were cost neutral.

"With these guiding principles, expanding the Games to 23 sports was not a viable option without growing athlete numbers beyond 4,350 or increasing costs," he said.

Parsons said including predominantly male CP Football would also have affected the gender balance of the Games.

"I know the CP Football community will be disappointed at our decision, but if the sport continues to make progress and further develops the women's game, then it will be in a much stronger position for inclusion in future Paralympic Games," he added. 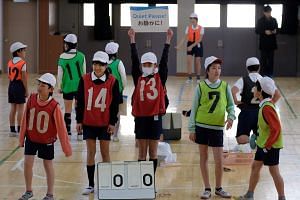 The first Paralympics were held in Rome in 1960 with only eight sports.

Olympics: Paris turns into Olympic park as part of push to host 2024 Games

The meeting of the IPC's governing board, which ends in London on Sunday, is also due to discuss the suspension of Russia's Paralympic committee and Malaysia's hosting of this year's world para swimming championships.

A spokesman said an update on Russia's status would be issued on Feb. 8.

Russia has been barred from Paralympic competition since August 2016 over allegations of state-sponsored doping that also led to the suspension of the country's athletics federation and its anti-doping agency.

Malaysia's hosting of the para swimming championships in Sarawak from July 29-Aug. 4 has been in the spotlight after the southeast Asian country said Israeli athletes would not be allowed in.

"Malaysia will not host any event that has representation from or participation of Israel," Foreign Minister Saifuddin Abdullah said.

Israel has called on the IPC to change the venue if it cannot persuade Malaysia to lift the edict.

The IPC said a statement was likely to be issued on Sunday.