Having conquered South-east Asia, para-table tennis player Jason Chee has set his sights on next year's Asian Para Games in Indonesia. But first, the navy serviceman who lost both his legs, left arm and three fingers on his right hand owing to a work accident, and then lost an eye to cancer, has the matter of next month's Thailand Open.

Registration had already closed but the Thai team, touched by his perseverance, sent the 34-year-old a special invite after he beat their paddler Thirayu Chueawong on Friday to secure gold at the Asean Para Games in Kuala Lumpur.

His coach Chia Chong Boon, 66, said: "Even the Thais were amazed at what he had achieved. He had just returned from another setback, yet he could beat the opponents who had beaten him two years ago.

"They specially asked him if he could go over because they want to play against him, and because he is an encouraging example to all of them, too."

Chee's improbable win had captured the hearts of his fellow Singaporeans. Hundreds posted their congratulations on The Straits Times' Facebook page, while thousands shared the online article of his victory.

Sales executive Joycelyn Pang, 41, said: "He's been through so much difficulties in his life, yet he could do what many of us couldn't - to win a gold. I'm so proud of him, his father, and I'm touched by what he has accomplished." 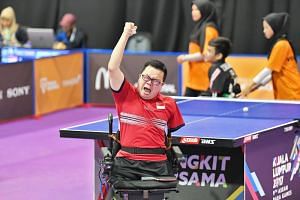 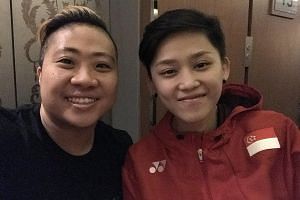 Life is all about adapting to challenges thrown at you

Chee's win was also highlighted by Speaker of Parliament Tan Chuan-Jin in his speech yesterday to launch the Republic of Singapore Navy's newest ship, Indomitable. Mr Tan said that Chee and his fellow para-athletes "all exemplify the very spirit that the name of this ship evokes".

Singapore finished seventh in the 11-nation table with a total of 50 medals, the most it has won at an away APG. Indonesia were overall champions with 126 golds, followed by Malaysia (90) and defending champions Thailand (68).

Singapore Disability Sports Council president Kevin Wong said: "We're in the process of developing our high-performance plan for the Tokyo 2020 Paralympics and Jason is a key person in our plans."

Silverware at the Asian Para Games will be tough against continental powerhouses South Korea, China and Iran but nothing is impossible, Chee told The Sunday Times.

"From now till then, I have to keep working hard. I am a man who never gives up and I always stay positive. Whatever challenges I face in life, I will not fear it."

When he first returned to table tennis in June 2013 after losing his limbs, he had to learn how to use his non-dominant right hand.

After his latest surgery, he had to make adjustments to his game when he returned to training in June. Chee said: "I could still see, but I lost some depth perception. I had to adjust my posture. Whenever I wanted to hit a shot that is on my right side, I have to turn my head. It wasn't easy at first, but it was no problem for me after some time."

Mr Chia, a four-time SEA Games table tennis champion, recalled: "When he came back, I noticed his skills had not declined. He just needed to turn his head more frequently. Knowing him, we knew that he would never easily give up, he was so eager to come back. I told him not to think about table tennis for the time being. What was important was that you recover. If you don't compete at this APG, there will be a next one.

"We were all amazed at his achievement."