The 34-year-old navy serviceman underwent surgery in May to remove his right eye after he was diagnosed with choroidal melanoma, a cancer of the eye. He returned to training in June. "This gold mattered the most to me. I have waited so long to win the gold, and I am relieved. It is a blessing."

Life has been tough on him. His mother died of kidney failure in 2011 at age 65, and a year later, he lost both his legs, left arm and three fingers on his right hand due to an accident at work on board a ship.

Through it all, including his latest injury setback, Chee has been a picture of stoic defiance.

At his third Games, he beat all four competitors in the men's singles Class 2 round-robin tournament to claim his first individual title. It was also Singapore's ninth gold in Malaysia.

He had won a bronze in the TM1-3 team event on Wednesday. 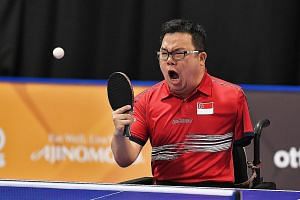 At the 2015 Games in Singapore, he won an individual silver and a team gold. He won a team bronze at the 2014 edition in Myanmar.

Chee and the rest of his team-mates will return to Singapore tomorrow afternoon.