NEW YORK (NYTIMES) - As coronavirus has swept the globe, placing cities and countries on lockdowns, cancelling the spring sports calendar and jeopardising every major event scheduled for 2020, Thomas Bach, the president of the International Olympic Committee, has not wavered in his determination to hold the Summer Games in Tokyo.

The opening ceremony is scheduled for July 24, with some 11,000 athletes and even more fans, volunteers, journalists, diplomats and others descending on Tokyo.

Yet complaints about moving ahead have been rising from athletes and other people connected to the Olympics, especially in the countries hardest hit by the disease.

In an interview on Thursday (March 19), Bach acknowledged the increasingly troubling situation but remained optimistic that infection rates might subside enough to allow the Games to go forward.

"We are affected by this crisis like everyone else and we are concerned like everybody else," he said.

"We are not living in a bubble or on another planet. We are in the middle of our societies."

Here are excerpts from the interview:

Q: Is there a date when you have to decide whether the Olympic Games will happen?

A: What makes this crisis so unique and so difficult to overcome is the uncertainty. Nobody today can tell you what the developments are tomorrow, what they are in one month, not to mention in more than four months. Therefore, it would not be responsible in any way to set a date or take a decision right now, which would be based on the speculation about the future developments.

A: There are many different prognoses. Some are telling you it will everywhere follow the same curve. Others are saying this will take much longer. The third ones are saying there will be different waves and we will have to live with it for a long time. This is why we rely on our task force, including the World Health Organisation, who are telling us it is too early to take a decision, and we are at the same time monitoring closely what is happening. 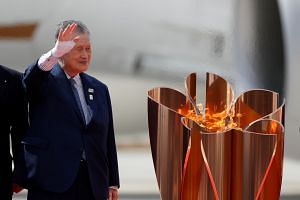 Coronavirus: Why haven't the Tokyo Olympics been postponed already?

Olympics: Brazil calls for Tokyo Games to be pushed back to 2021

Q: Do you have a group that is gaming out what it would look like and what would be needed to move the Games to the fall, the summer of 2021 or the summer of 2022 or any other time frame that has been discussed?

A: This would mean we are speculating about developments. We don't know what the situation will be. Of course we are considering different scenarios, but we are contrary to many other sports organisations or professional leagues in that we are four and a half months away from the Games. They are even more optimistic than we are, because most of them have postponed their events until April or the end of May. We are talking about the end of July.

Q: Japan's Prime Minister Shinzo Abe said he was interested in holding a "perfect Games" and that he had gotten a commitment from the other Group of 7 leaders to do that but he did not specify a time frame. Does that give you the freedom to pursue an alternative date?

A: The Japanese government was asked this question after (Abe made the comment) and the answer was that postponement was not mentioned in the meeting of the G-7. For us, it would not be responsible now and it would be premature to start speculation or make a decision at a time when we do not have any recommendation from the task force.

Q: Have you told the task force to give you a recommendation by a certain date?

A: No. They are the experts. They have to know based on their scientific experience and their worldwide overview when they have enough information to give us their advice based on scientific evidence.

Q: What do you say to people who say you seem out of step with everything that is going on? All the biggest sports events have been delayed.

A: They have cancelled or postponed games for next Saturday or two weeks after. Some of them have postponed events to make room for other events to take place. The European championships in soccer was supposed to take place in June and start in Italy. They have postponed this for a year, and it was welcomed by the professional leagues in Europe because this gives them an opportunity for them to finish their seasons.

Q: You could do the same. You are counting on the world's best tennis players, and some members of those soccer clubs. The NBA wants to finish its season this summer, and many players that would play basketball in the Olympic tournament would not be available. Why wouldn't you follow that lead and clear out the schedule?

A: This is totally different. We do not have Olympic Games now, so we do not need to clear our schedule.

Q: When will it not be too soon to decide, or when, if you don't decide to postpone, would you risk cancellation?

Q: So there will be an Olympics at some point in Japan?

A: I gave you the answer.

Q: The Olympics are a huge financial enterprise, but at their roots they are a peace movement aimed at bringing people together and attempting to repair the world. Are you concerned that by forcing so many people to continue to plan for this event rather than focusing on other needs, the IOC may be doing harm?

A: There are three things. We have established this clear principle, that we are acting responsibly. It is first and foremost about protecting the health of everyone involved and to support the containment of the virus. Second, the decision of the IOC will not be determined by any financial interest. Thanks to our risk management policies that have been in place for four years and our insurance, the IOC in any case will be able to continue operations and continue to accomplish our mission.

The 206 national Olympic committees and the international sports federations expressed that the world in this extremely difficult and concerning situation needs a symbol of hope. So for us, while not knowing how long this tunnel will be, we would like the Olympic flame to be a light at the end of the tunnel, and to send the message of peace, what we always do, but in this very difficult circumstances a message of hope and community of humankind.

Q: Financially, what is the cost of a delay of one year or two years?

A: We have our risk management policies in place and our insurance and this will make it possible for us to continue our operations and organise future Olympic Games.

Q: Many of the broadcast payments don't arrive until just before the opening of the Games. Does the IOC or Tokyo need this money by July to avoid significant financial repercussions and to continue to meet its ongoing expenses?

A: The IOC has no cash flow problem.

Q: What about the Tokyo organising committee?

A: I have no indication for this, but as far as I am informed the answer is also no.

Q: You were an Olympic athlete. How would you have felt if I had locked you in a room from March through May of 1976 (when Bach competed as a fencer for West Germany) and told you that you could not train?

A: I can sympathise with these athletes because of my experience. I had a similar situation before the Games in Moscow in 1980, when there was also a lot of uncertainty. Would the Games take place in Moscow? Could we go? Would we be allowed to go, under which circumstances? For an athlete, the worst thing for preparation is the uncertainty that distracts from training and preparations. I told the 220 athletes in the phone call Wednesday that we cannot pretend we have answers to all your questions. We are in the same situation as you and the rest of the world.

Q: Do you feel comfortable putting on an Olympics that might be an unlevel playing field because you are going to have athletes from certain countries who are unable to train?

A: We advised the athletes to get in touch with their (national Olympic committees) and national authorities to have firsthand information about what is possible for their training, while respecting their restrictions. We have seen in some countries there are opportunities. We also have seen athletes are very creative to bridge this gap for training at home and other training methods. It is a unique exceptional situation, which requires exceptional solutions.

Q: When you told the athletes to go full steam ahead, in some cases what you were saying in certain hot zones was, "Risk your life to train" because that is the reality right now.

A: To be very clear, we said we strongly advised the athletes to respect the regulations in place in their country and to consult with the national authorities. We are committed to the health of the athletes and to contain the virus.

Q: What do you need to see to say, "No, I can't move forward with these Games."

A: The cancellation is not on the agenda.

Q: What about postponement?

A: I have already answered. We are committed to the success of these Games.