AFP - With Kenya's famed track and field team still unsure about whether it will be allowed to compete at the Rio Olympics, an unlikely new medal prospect has emerged for the East African nation - their men's sevens rugby outfit.

Hardly a world power in the 15-a-side game, Kenya has suddenly popped up as a genuine medal contender in sevens, which will be played in Rio as rugby returns to the Olympics after a 92-year hiatus.

Currently ranked seventh in the world, ahead of traditional heavyweights including England and France, Kenya served notice of their intentions for Rio by winning the Singapore leg of the sevens world series, beating Fiji in Sunday's final. 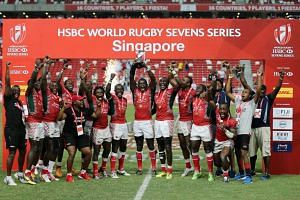 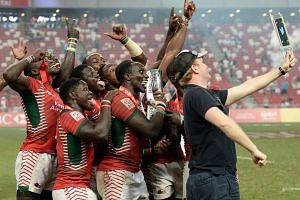 It was Kenya's first tournament win in a world series event after they had made two previous finals, in Australia in 2009 and New Zealand in 2013, and it could not have come at a better time with the Olympics just four months away and the country's athletics team under a doping cloud.

The track and field squad faces the possibility of being banned from Rio unless it passes a new anti-doping law following a string of positive tests.

"For our players, this win will give them huge amounts of self-belief," Kenyan coach Benjamin Ayimba said.

"We've always had the potential, but knowing now that we can beat the best will give us even more confidence for success in future tournaments. This will make us an even better and more dangerous team to play against."

Kenya has only ever won Olympic medals in two different sports - athletics and boxing. Of the 25 gold medals Kenya has won, 24 have been in track and field. But the rugby sevens team is hoping to change that.

"We hope it inspires the kids to play rugby and it just gives them a lot more heroes to look up to so, for us, it's a major milestone," Ayimba said.

"The target for Rio is always to win."