Japan finished ahead of the United States, eventually disqualified from third spot, for a technical infraction at the first changeover between Mike Rogers and Justin Gatlin, giving Canada the bronze instead.

There was no doubt about Japan's silver though, as Japan's Aska Cambridge edged out the US' Trayvon Bromell in the last 100m leg to clinch the medal - an athletic coup for an Asian team.

While all eyes were on the Jamaicans and Americans, Ryoto Yamagata ran a blistering opening leg for Japan, and teammates Shota Iizuka and Yoshihide Kiryu kept up the pace before finally handing the baton over to Cambridge.

To non-athletics fans, they will find it interesting that Cambridge, 23, has a Jamaican father and a Japanese mother.

Cambridge, also known as Asuka Antonio 'Aska' Cambridge, was born in Jamaica but left for Japan at the age of two. 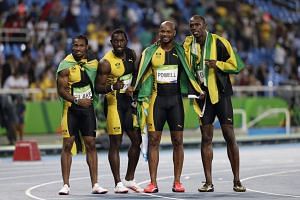 The 1.79m-tall sprinter has been running from a young age, and represented his high school in Tokyo and later Nihon University.

Takashi Ishimori, a coach at the Dome Athlete House where Cambridge trains, told the Japan Times that Cambridge has "developed quicker with the same amount of training" compared to a top Japanese sprinter.

Powell was part of the gold-winning Jamaican relay team this morning, along with Yohan Blake and Nickel Ashmeade.

Earlier at this Olympics, Cambridge had run 10.17sec in the 100m semi-final, failing to make the final eight.

His personal best is 10.10sec while Koji Ito holds the Japanese national record of 10.00sec.