More than 100 victims have accused Nassar of sexual assault under the guise of medical treatment, including members of the Olympic gold-medal winning gymnastics team - Simone Biles, Aly Raisman, McKayla Maroney and Gabby Douglas.

As victim testimonies during a sentencing hearing continued for a third day in Michigan, The Detroit News reported that officials at Nassar's employer, Michigan State University, had been informed of sexual abuse allegations as early as 1997.

The officials include MSU President Lou Anna Simon, who was informed in 2014, as well as athletics trainers, assistant coaches, a university police detective and others, according to the newspaper.

Simon and some others named are still employed at the university, which did not return a request for comment.

In a statement published on its website, spokesman Jason Cody said "any suggestion that the university covered up Nassar's horrific conduct is simply false."

Nassar has pleaded guilty to 10 counts of criminal sexual conduct. The 54-year-old could face life in prison when he is sentenced.

Nassar says it's too hard to listen to victims, judge calls him 'delusional' 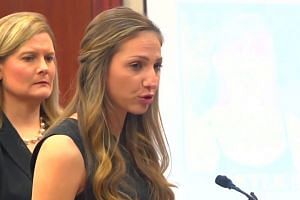 As victim statements resumed, Michigan state judge Rosemarie Aquilina revealed that Nassar had written asking to be excused from the hearing of victim testimonies, fearing his mental health could not withstand them.

The judge dismissed the request and could hand down Nassar's sentence as early as Friday.