SINGAPORE - Zhu Xiaoping, the coach who led Singapore gymnastics to a first gold in the 2015 SEA Games group all-around competition, died on Thursday morning (Jan 19). She was 56.

Her husband, Lin Zhenqiu, issued a statement saying: "Our family is deeply saddened to inform you that my wife passed away in her sleep Thursday 5.05am.

"As many of you know, she has been suffering from cancer some time now. We are relieved that her passing was peaceful and painless."

When Zhu was first diagnosed with cancer, it had already spread to her liver and lymph nodes.

But she felt compelled to help the gymnasts despite being ill because their coach had left abruptly in December 2014 for personal reasons and it was only six months to go before Singapore hosted the biennial Games.

Unfazed by the task of preparing the athletes within a short span of time, the Jiangxi native led the girls in training up to six times a week in the lead-up to the Games.

The intensive sessions bore fruit when the historic gold was won and she was given the job permanently.

For her dedication to her craft and to her charges, Zhu was honoured with a special award at the Singapore Sports Awards last June.

Her actions were praised by Minister for Social and Family Development and Singapore National Olympic Council president Tan Chuan-Jin, who visited her home that month. 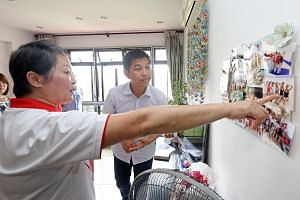 Cancer did not stop her

He said then: "Coach Zhu Xiaoping put her athletes and Singapore Gymnastics' interests above her own health and served selflessly to help them prepare for the 28th SEA Games. Her dedication to sport is admirable."

Besides her husband, himself a former national coach, Zhu also leaves behind a daughter.

Zhu's wake will begin on Thursday night at Block 403, Fernvale Lane. A memorial service at 8pm on Friday will be conducted at the same location.

The cremation will take place on Saturday morning (Jan 21) at 8.45am at Mandai Hall 1. The cortege will leave Block 403, Fernvale Lane, at 8am. Transport is provided.