Many feel the world No. 6 still has much to offer, despite being plagued by a chronic knee injury

Feng Tianwei is Singapore's most bemedalled Olympian and had finished a creditable third in the International Table Tennis Federation Women's World Cup just two weeks ago.

Little wonder that news of her being dropped from the national team was greeted with shock by members of the local sports fraternity.

Officials and athletes The Straits Times spoke to were surprised that the Singapore Table Tennis Association (STTA) would drop the world No. 6, a decision it announced in a press statement yesterday.

Former national swimmer Mark Chay, who was the Singapore Hockey Federation's chief executive from 2011 to 2012, said: "I was shocked that they would let their best player go. I hope they had a dialogue with Feng before making this decision.

"I don't think her age should be that big a concern. Wasn't there a player in her 50s at the Olympics?" 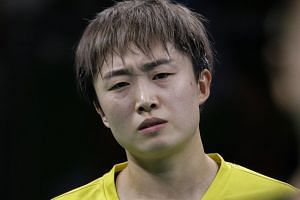 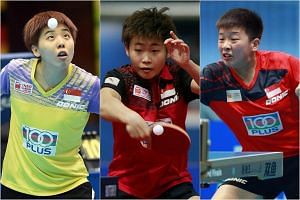 Luxembourg's Ni Xialian, 53, gave Feng a scare at the Rio Olympics. In the end, the Singaporean needed six games to see off her opponent.

Many felt that the STTA's decision was bizarre, given that Feng still has much to offer, despite being plagued by a chronic knee injury.

Former Singapore men's head coach Yang Chuanning said: "I have no doubts that Feng Tianwei will continue to be a top player.

"If she continues to train, she will definitely still be one of the world's best in 2020."

Malaysia's Ng Sock Khim, the singles silver medallist at last year's SEA Games, said: "Tianwei might not have won many tournaments recently, but she is still one of the best in the world. I think maybe the competition is getting stronger compared with before, and Feng is adapting to the new playing field.

"That said, Singapore still has many good players like Yu Mengyu and Zhou Yihan."

The Straits Times understands that Feng has had numerous run-ins with the STTA management, and this played a part in her exclusion.

Interestingly, 34-year-old Gao Ning, Singapore's top-ranked male player at No. 41, was asked to take on a player-assistant coach role.

Former coach Yang, who was himself sacked by the STTA 1 ½ years before his contract was up, called on the authorities to step in.

He said: "It is okay for people like me, because I can just go back to China. The impact is far greater for Tianwei. She is now a Singaporean.

"Higher authorities like Sport Singapore (SportSG) need to step in. Otherwise, the STTA would have complete say."

SportSG's Toh Boon Yi, who heads the Singapore Sports Institute, said: "We will discuss with Feng Tianwei, STTA and the Singapore National Olympic Council on the option of supporting her under the Sports Excellence (Spex) Scholarship scheme, and the performance targets and milestones expected of her."

The Straits Times understands that Feng's Spex scholarship, which runs out at the end of the year, will not be revoked.

Added Yang: "Tianwei has contributed so much. Won't other athletes watch and wonder if they will suffer a similar plight in future?"

Another former Singapore coach, Liu Guodong, who led the women's team to a silver at the 2008 Olympics, said the exclusion could actually be a blessing in disguise for Feng.

Now coaching the Hong Kong team, Liu, who also left the STTA fold under acrimonious terms, said in a phone interview from Beijing: "It is not necessarily a bad thing. She can now make decisions independently.

"When people write you off, that is your chance to prove them wrong. As athletes, it is always our results that speak the loudest."