SINGAPORE - From competing in the Schools National B Division netball tournament last year to making her debut in the Netball Super League (NSL) this season.

It has been a dream come true for Rachel Ling, who graduated from CHIJ St Joseph's Convent last year and now plays for Llabten Narwhals under the new rule this season which makes it compulsory for teams to field two Under-21 players for at least two quarters in every match.

The 17-year-old, who plays in goal defence, played all four quarters in the NSL match against Swifts Barracudas at Our Tampines Hub on Saturday (March 30) and helped her team to a 54-49 victory, which secured fourth spot in the six-team league and a place in the semi-finals next Saturday.

Rachel recalled how she felt nervous and unsure about her ability at the start of the season, but advice from senior players and her coach helped her develop.

She said: "I started off a bit shaky because I wasn't confident, but a senior player told me I should just contest for the ball like how I do during training and to always keep my head up even if I'm not performing well.

"What helped me the most was the encouragement that my teammates gave me. When I was feeling down, they would talk to me individually which really helped me improve from match to match."

Narwhals coach Huang Po Chin said: "I think Rachel did really well as goal defence. She's quite speedy and she knew that she had to be very decisive with her moves and to challenge hard."

Alena Ong is another fresh face in the NSL. The Mission Mannas wing defence played her first full match on Saturday in the 57-47 win against Sneakers Stingrays which moved them to second in the table.

"I was quite nervous going into the game today because I was less experienced than everyone else," said the 19-year-old.

"But, with the new (U-21) programme, we get more court time and we get to learn from the seniors." 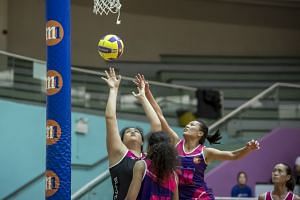 In another match on Saturday, Blaze Dolphins beat Magic Marlins 58-42 to top the table.

In the last round of matches on Sunday, Mannas will play Barracudas at 11am, Stingrays will face Marlins at 1pm and Dolphins will take on Narwhals at 3pm. All matches will be played at Our Tampines Hub.

The third- and fourth-placed teams will face each other in one semi-final next Saturday (April 6), while the other semi-final will see the league leaders take on the second-placed team. The Grand Final is on April 13.