It is no secret that the national badminton team have struggled to deliver results in recent years.

Following the departures of seniors like Derek Wong, Vanessa Neo, Yao Lei and Shinta Mulia Sari, a young Singapore side with an average age of just 22.1 years returned from the April 4-15 Commonwealth Games with no medals, the first time in two decades the team had returned empty-handed.

Singapore also did not send a team to the Asian Games for the first time since 1998 following the shuttlers' failure to qualify for the Aug 18-Sept 2 affair in Indonesia.

"We know of the many challenges facing us, both inside the SBA, and externally, in terms of the entire badminton fraternity," he said.

"For example, we are very aware of the declining badminton standards, and the challenges leading to us having problems winning medals regionally and internationally.

"We know that our team sizes are not big enough, and we struggle to put together a first team... These problems are not easy to manage or overcome, and I want to be open and transparent about it, and want you to know that we are still trying to find solutions to address these problems."

Yet, despite the issues, there was a sense of optimism in the air as Leow and his team unveiled a slew of new initiatives to a 170-strong crowd.

"The move will make it easier for players to track their progress and performance and see how they fare against their peers," said Leow.

Shinta, now an SBA coach seconded to the Singapore Sports School, added: "The ranking will be a good start for young players - they will be motivated to improve their ranking and it would be easier for coaches like myself to set them targets."

But before that, the national open championships will be brought back in January after a six-year hiatus.

Former national player and SBA deputy president Hamid Khan said: "As players, you would be looking forward to a national championships because you want to be the best in Singapore."

Judy was very "happy and excited" about the new parents' group, saying: "I have been voicing (out for) and wanting this (the group) for years... It's always easy to say what you want to do, but Mr Lawrence Leow really wants to bring about change and I can see it happening." 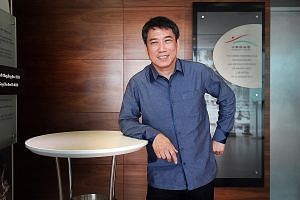 Leow said the new initiatives were the result of four months of engagement with various members of the fraternity following the annual general meeting in June, when he was elected to succeed Tan Kian Chew.

Leow, the chairman and chief executive officer of Crescendas Group, also revealed that his team are in the midst of amending the SBA's constitution, and aim to professionalise the secretariat in the coming years.

"This structure has been around for many years. We find that because of the many things that we want to do, this structure doesn't have the breadth to move forward," said Leow, who cited the possibility of introducing the role of a patron, which could help with fundraising but which the constitution does not cater for.

"In order to have the breadth, we need to get the structure reorganised. That definitely involves amending the constitution."

He aims to get the changes done by the AGM next June and is hopeful that the session yesterday will help the SBA "move forward together".

He said: " If we don't share these plans with everyone, some quarters may be left out and they would say they don't know and they don't have a role to play.

"And if they are left out, then you can't move together as one big family."

•National Open Championships: To be held from Jan 23-27 next year, with five categories and prize money totalling $13,000

•New national junior championships which, along with the national Open championships and at least five sanctioned tournaments, will form the local circuit

•Amendment of constitution: To update the SBA's management structure with possibly a "30 per cent expansion" in MC members. To be completed by the annual general meeting next June.

•Professionalising the secretariat: To relook secretariat operations and possibly introduce new departments such as business development. To be done in "a few years".

•Possible additions to the coaching team, in addition to the men's singles head coach Mulyo Handoyo, who was appointed this year.

•Improving a player's post-playing career by roping in suitable companies and matching them with players who are willing to take on the workload.

A version of this article appeared in the print edition of The Sunday Times on November 04, 2018, with the headline 'Moving ahead as 'one big family''. Subscribe
Topics:
More
Whatsapp Linkedin FB Messenger Telegram Reddit WeChat Pinterest Print Purchase Article Copy permalink