DUBLIN (NYTIMES) - Conor McGregor, the Ultimate Fighting Championship’s (UFC's) biggest star and one of the world’s highest-paid athletes, is under investigation in Ireland after a woman accused him of sexual assault in December 2018, according to four people familiar with the investigation.

McGregor has not been charged with a crime.

Following the usual protocol in criminal investigations in Ireland and much of Europe, where a formal charge does not necessarily follow an arrest, McGregor was arrested in January, questioned by law enforcement and released pending further investigation, according to the people.

On Tuesday (March 26), McGregor announced his retirement from the UFC, though a spokeswoman said it was unrelated to the investigation.

“I wish all my old colleagues well going forward in competition,” McGregor wrote on Twitter.

He has only fought once since 2016 - a bout in October that he lost to Khabib Nurmagomedov - and has previously announced a retirement, only to come back. 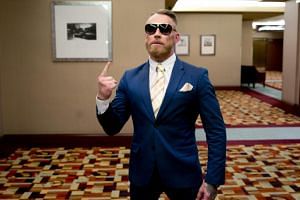 The woman making the allegation said it occurred at the Beacon Hotel, an establishment attached to a business park on the edge of Dublin.

McGregor is an occasional guest there, according to a person with knowledge of the situation.

Irish media have reported on the case since news of the assault first broke late last year, but without naming McGregor. Laws in Ireland restrict the media from identifying individuals charged with rape unless they are convicted.

A spokesman for Ireland’s police service would not confirm if McGregor is the suspect.

In response to a request for comment related to an “unnamed sportsman”, it said a man had been arrested on Jan 17 and released without charge while investigations continue.

McGregor and the UFC have not commented on the allegations.

Karen J. Kessler, a publicist for McGregor based in New Jersey, issued a statement that did not address the validity of the accusation, but asserted his retirement had nothing to do with the investigation.

The Beacon is about a 25-minute drive from Crumlin, the working-class South Dublin neighbourhood where McGregor grew up.

Its typical guests are white-collar workers tied to the financial services or technology companies that have recently relocated to the area.

Still, people familiar with the hotel operations said McGregor had visited before the night police say the incident took place.

Police retrieved evidence from the room McGregor stayed in and have also secured closed-circuit television camera footage, according to a person with knowledge of the investigation.