LOS ANGELES (AFP) - Mixed martial arts star Conor McGregor said on Tuesday (March 26) he had retired from the sport, vowing to hang up his gloves for the second time in three years.

The trash-talking Irish star of the Ultimate Fighting Championship (UFC) wrote on Twitter that he had decided to call time on his career inside the octagon.

"I wish all my old colleagues well going forward in competition.

"I now join my former partners on this venture, already in retirement. Proper Pina Coladas on me fellas!"

McGregor, 30, has not fought since being well beaten by rival Khabib Nurmagomedov in October last year.

The Dubliner, one of the most bankable stars in UFC, had previously vowed to retire in 2016 in a move that was widely seen as a negotiating gambit.

"I have decided to retire young. Thanks for the cheese," McGregor wrote in April 2016. 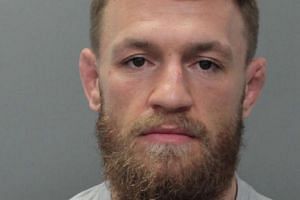 McGregor's decision comes after a troubled few weeks for the Irish fighter.

He was arrested in Miami earlier this month after allegedly smashing a phone outside a Florida nightclub.

He was later charged with criminal mischief and strong-armed robbery after police said he had slapped the phone out of a fan's hand and then stomped on it.

Video footage of the altercation showed McGregor throwing a steel dolly through a window of the bus.

He was also at the centre of a brawl which erupted at ringside in the immediate aftermath of his defeat to Nurmagomedov last October in Las Vegas.

In January, the Nevada State Athletic Commission later handed McGregor a six-month suspension for his role in the post-fight melee, backdated to October. McGregor would have been eligible to fight again in early April.

McGregor is one of the most successful fighters in the history of mixed martial arts, helping to broaden the sport's appeal beyond its base of hardcore fans.

The Irishman is estimated to have earned $200 million from his fighting career, which included a much-hyped cross-combat bout against former welterweight boxing champion Floyd Mayweather Jr. in August 2017.