The Straits Times polled 20 current and former national athletes and officials yesterday, with 13 supporting the organisation's decision and the other seven disagreeing.

While former national sprinter U. K. Shyam had sympathy for Soh, he was unsurprised by SNOC's ruling. He said: "Rui Yong may have shown good sportsmanship when he helped runners from Indonesia and the Philippines, and trains really hard and delivers results.

"But he has also repeatedly antagonised SNOC and it is reasonable for SNOC to deem his behaviour problematic.

"If athletes need to express opinions or criticise, it can be done in a measured and respectful manner."

In March, the 27-year-old Soh clocked 2hr 23min 42sec at the Seoul Marathon to rewrite the national record which had stood since 1995. It was also comfortably within the SEA Games qualifying benchmark set by SNOC.

Results were not the only criterion, the SNOC said on Thursday in explaining its decision.

Rui Yong... has also repeatedly antagonised SNOC and it is reasonable for SNOC to deem his behaviour problematic.

His dispute with Ashley Liew has yet to reach a conclusion and if, meanwhile, his results meet the qualifying criteria, then he should be allowed to go to this SEA Games.

It noted that "since the 2017 SEA Games, there have been numerous instances where Soh has displayed conduct that falls short of the standards of attitude and behaviour that the SNOC expects of and holds its athletes to".

It was a sentiment shared by former national swimmer Tao Li.

"Athletes have to comply with codes of conduct and regulations, which are multi-dimensional and not based on results alone because they are representing a country and a certain standard is expected," she said. "There are rules to protect the interest and image of the country and governing bodies, and athletes have to abide by them."

She and Shyam cited China's retired former swimming world champion Ning Zetao and Thailand's star sprinter Jirapong Meenapra, who were dropped from their national teams for disciplinary and sponsorship disputes respectively, as examples of how governing bodies consider factors other than results for selection. 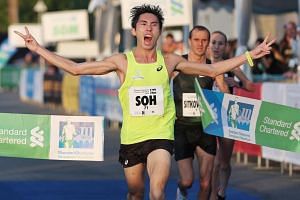 SEA Games: Soh Rui Yong has an attitude. But does being outspoken make it a bad one?

The SNOC and Soh have clashed several times in recent years. Before the 2017 SEA Games, he was formally warned over a breach of regulations regarding the promotion of personal sponsors on social media during the biennial Games.

He had also cut holes in his race vest before his event in Kuala Lumpur, and reportedly upset sponsor 2XU, which terminated its sponsorship of Singapore Athletics four months later.

This April, the SNOC served Soh a legal letter demanding he publicly retract allegations against fellow marathoner Ashley Liew, whom the SNOC had nominated for an international sportsmanship award for his actions at the 2015 SEA Games marathon.

Among Soh's supporters were Singapore Shooting Association president Michael Vaz, who felt these incidents should be addressed independently, and the SNOC should have approved the nomination.

He said: "When you are wearing the flag, your behaviour must be exemplary. Cutting holes in the national vest is a no-no. If he has been dealt with for that, then it's water under the bridge and you cannot hold this against him forever.

"His ongoing dispute with Ashley Liew has yet to reach a conclusion and if, meanwhile, his results meet the qualifying criteria, then he should be allowed to go to this year's SEA Games."

An online petition at change.org titled "Reinstate Singapore Athlete Soh Rui Yong for SEA Games" has been set up.

It received over 900 signatures as of press time last night.