At the first SafeSport forum organised in May, many national sports associations (NSAs) said they were unprepared to deal with cases of alleged sexual abuse and did not have standard operating procedures to handle such disclosures, according to CoachSG director Troy Engle.

Help is coming next year when they will have a framework to rely on, with the introduction of the SafeSport commission.

Announced by Minister for Culture, Community and Youth Grace Fu at the CoachSG conference yesterday at Republic Polytechnic, the new initiative will be set up by Sport Singapore (SportSG) in partnership with the Ministry of Social and Family Development (MSF), Ministry of Education (MOE) and Singapore Police Force.

It will develop guidelines to help the sports fraternity have a better understanding of best practices, and establish a reporting process.

Engle said that SportSG will roll out resources for victims, like a hotline and helpline, in due course. Each NSA is also required to appoint a safeguarding officer by this year as a conduit for disclosures.

"Basically the bottom line is, if you see something, you have to say something," he said.

"I know people now are empowered to say something, but they don't necessarily know how to."

TROY ENGLE, CoachSG director, on why the SafeSport commission was created.

There are other countries still behind on this... Singapore is (tackling) something that is happening not only in sport, but socially as well.

"The moves benefit all parties - the athletes, coaches and parents too," said Yuen, a former national swimmer herself. "As a parent, I feel more assured and secured.

"At the same time, there are proper guidelines because allegations could be made against coaches stemming from politicking, and the poor coach suffers."

Engle, associate director of the United States Olympic Committee from November 2006 to September 2008, was heartened by the "open and frank" conversations in a bid to tackle the problem.

He said: "I do think, from talking to my peers around the world, that we are ahead of most other countries in terms of the willingness to have these sort of conversations.

"And that, to me, means we have the potential, and probability, to be successful. If you ignore the problem, it won't go away."

"This is a very exciting step forward for Singapore and all sports in Singapore," said the Australian, who took up her post in June last year, after 11 years at Gymnastics Australia. "There are other countries still behind on this issue, and Singapore is stepping up on something that is happening not only in sport, but socially as well."

Internationally, the biggest case of sexual misconduct in sport was exposed in late 2016, leading to the conviction of former US gymnastics national team doctor Larry Nassar, who was accused of molesting over 250 young girls as far back as 1992. 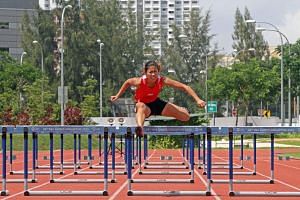 Do more to protect athletes from sexual abuse

Locally, several cases have also surfaced this year, including one where a football coach was given 26 years' jail and 24 strokes of the cane for sexually assaulting seven boys aged between eight and 11.

In response, CoachSG updated its Values and Principles in Sport course to include discussions of real incidents between coaches and their charges, and made it compulsory for the over 3,000 coaches in the national registry.

Jennifer Teoh, director and senior principal forensic psychologist at MSF, gave a talk on issues like identifying abuse and managing disclosure from victims at yesterday's conference, attended by some 300 coaches, sport administrators, athletes and educators.

The conference also highlighted the opportunities and resources available for local coaches to upgrade their skills.

One of them is the continuing coach education programme, peer-to-peer learning platform which has expanded in reach and content; over 2,700 coaches participated in 90 workshops last year.

Another is the coach development grant, launched in December last year, which provides financial assistance to those who wish to upgrade their knowledge and skills through courses or attachments.